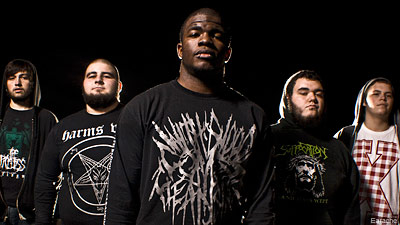 Chicago deathcore outfit Oceano are down a man after the recent departure of Andrew Mikhail. The guitarist reportedly quit, and, in a statement to Lambgoat, it seems the trouble boils down to creative differences, intentions and motives.

"From day one, I've had a vision of being in a 'band of brothers' to play aggressive music with all across the globe," Mikhail told Lambgoat. "Whether it was fast, heavy, dark, whatever, I just didn't care. My concerns were if we did it, it was from the heart, and if it got the point across to the world."

Mikhail continued, "Music is an art form and an expression of self and surroundings. I, over time, simply felt like I wasn't getting either out of Oceano. That's possibly the simplest way I can say why I quit without doing the typical bashing and such. I will say this, I took many 'for the team' personally and for all the people that dug what we did. But, the line has to be drawn somewhere for my own well being and creativity."

Oceano released its debut LP, 'Depths,' back in April. The band have a gig set for Feb. 13 with Monsters, Dorians Decay, Elysion Fields and the Beauty of Bloodshed. There's been no comment from the band on the lineup shift.

Mikhail later thanked "anyone and everyone who has supported/hated my work and endeavors with the band. You all will be seeing me soon whether you like it or not."