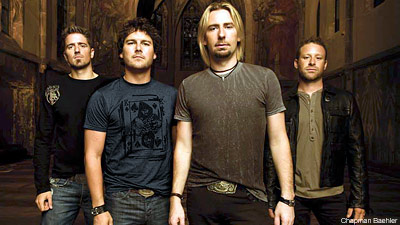 Nickelback sure do love their 1980s arena rock. Not only do they write some of the most anthemic rock you'll hear on radio these days, on their most recent album, 'Dark Horse,' the Canadian superstars hired Robert "Mutt" Lange to sit in the producer's chair. "The cool thing about Mutt is that he always envisions a band playing in an arena and the dynamics that should go behind that." says Nickelback guitarist/vocalist Chad Kroeger when Noisecreep caught up with him this week. Known for his sonically groundbreaking work on classic albums by AC/DC, Def Leppard and Foreigner, Lange has been one of the most influential guys working in the business for over four decades.

"Working with him was a change because I always approach songwriting from an almost movie or storytelling angle but Mutt doesn't really get into that. He told me that he wants the "bumper sticker" quality to come out in our songs which was funny but I totally understood what he meant, " revealed the frontman. "He wants lines and choruses that jump out at you so I actually had to re-write "Burn it to the Ground" three times." We asked Chad if the third time was the charm and he laughed and offered, "I looked at this way, no news is good news!"

Noisecreep asked Kroeger about Nickelback's brand new video for the aforementioned 'Burn it to the Ground,' "The song's vibe just fits the setting an arena show gives off so we filmed it at the O2 Arena on our last UK tour. Matthew Amos did a fantastic job of capturing the energy of our live show," says Kroeger. The song comes off 'Dark Horse' but is also available on the brand new 'Transformers: Revenge of the Fallen' soundtrack.

Be sure to head over to AOL Radio to find out how to win a trip to see Nickelback in Vegas and party like a rockstar with the band!
Download Nickleback Songs

Filed Under: nickelback
Categories: Videos
Comments
Leave A Comment
Back To Top