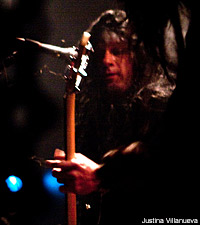 Two hours before showtime, Nader Sadek frantically moved around the venue making sure everything was perfect, as any anxious artist who is about to display their work. Cryptopsy drummer Flo Mounier's workout playlist pummeled through the speakers. It included lots of Meshuggah, Dillinger Escape Plan, Deftones with some King Diamond and Wu-Tang Clan sprinkled in here and there. Doors were open and people were ready to see the performance known as B'doun O'mr, also known as Ageless.

That Saturday night marked the second time Steve Tucker (ex-Morbid Angel), Mike Lerner (Behold ... the Arctopus) and Mournier would join forces in a fine art setting prompted by visual artist Nader Sadek -- who is known for his eerie set pieces designed for musicians like Attila Csihar and Andrew W.K.

The stage -- which was set up like the wooded cemetery in a mystical black metal music video -- glowed red and orange. At about 9:30 PM a veiled mysterious person joined the tall tree branches and raw body part sculptures on stage to play a short sequence of noisy black metal riffs. 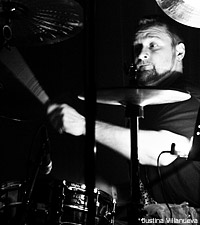 For the remainder of the next song, as Tucker, Mounier and Lerner took over the set, the mysterious person was unplugged, but on stage to prove something.

About 25 minutes after annihilating Santos Party House, the four men exited the fog fused forest and never returned. Everyone was left wanting more blackened death. And I think the perfect cure to that urge would be some sort of EP or split featuring the odd and inspiring collaboration among Tucker, Mounier and Lerner.

Catch the next metal-related fine art event at Brooklyn's Public Assembly on December 12. At the event titled Hideous Gnosis -- which will be a symposium on black metal -- artists Lionel Maunz and Nader Sadek will feature visual work as writers and theorists (like Brandon Stosuy and Liturgy frontman Hunter Hunt-Hendrix) will provide discussion.