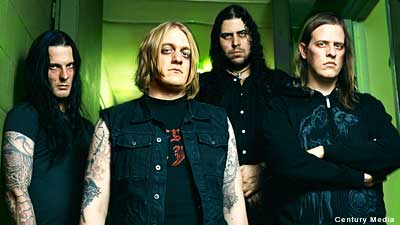 Mirror, mirror on the wall? Who's the most extreme American metal band of them all? Why Chicago's Nachtmystium, of course. Actually, the band has shaken things up a bit and the boys have issued 'Doomsday Derelicts,' a four-song EP, via digital platforms like iTunes. The release, according to the band, is a more "laid back, 'have a few beers and record'" type of release, with more "thrashy, straight ahead metal stuff" as opposed to the more psychedelic nature of 'Assassins.' Leave it to this band to always keep things fresh and unexpected.

But what is most appealing to metalheads is the fact that Usurper's Carcass Chris contributed some guest guitar leads on 'Pitch Black Cadence' and 'Hellish Overdose.' What's appealing to fans of rock music in general is that the record was recorded at Electrical Audio Studios, the facility of one Steve Albini, who made his name by producing a little band called Nirvana.

The band recorded the EP in May of last year, when Albini's studios had an opening. Vocalist/guitarist Blake Judd is releasing the CD version on his own Battle Kommand Records. The track listing is comprised of 'Bones,' 'Life of Fire,' 'Hellish Overdose' and 'Pitch Black Cadence.'