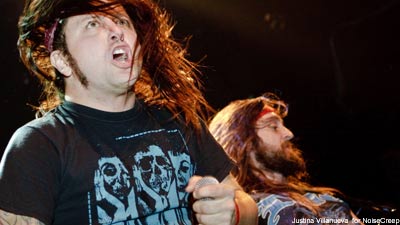 "We're going to have a band meeting real quick," Municipal Waste frontman Tony Foresta said on Dec 9 at New York City's Gramercy Theater. This after the band realized they weren't on the same page for the next song on the set list.

Foresta doesn't need to announce for a circle pit like many other bands do these days. He just gives the gesture before the band even starts, and the place is set ablaze with running feet.

"Do you guys do the wall of death here?" Ryan Waste asked the antsy crowd.

"You guys better! Sick of It All is from this town," Foresta said.

"We're doing all this work up here how about you guys do something down there," Waste said.

As the band played 'Wrong Answer' -- the song with the game show-styled music video where Foresta kills all his bandmates -- a wall of death formed in the center of the venue. There were no cases of death, but a whole lot of colliding happened. 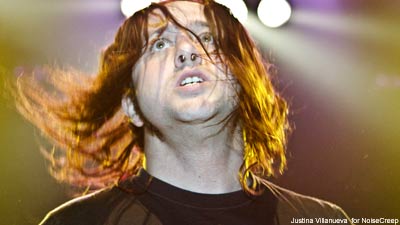 "You know you gotta crowd surf to stage dive, right?" Foresta wanted to give the audience a lesson in proper show partying. In all of this chaos, I don't know how there were people sitting in the theater seats. But there were too many occupied seats -- and there was too much fun happening on the floor.

"We have a song called 'Boner City' and we're sponsored by Taco Bell," Foresta proudly said.

Municipal Waste played 'Born To Party' and dedicated it to a special someone in the crowd: drummer Dave Witte's mother, or "Momma Witte" as Foresta called her.

Lucky Europeans can catch Municipal Waste in late January to early February when the cross the Atlantic Ocean and play shows with Victims and Reproach.

Filed Under: municipal waste, MunicipalWaste, reproach, sick of it all, SickOfItAll, victims
Categories: News
Comments
Leave A Comment
Back To Top