When you sit down and think about it, it's sort of crazy no one has yet to come out with a mosh pit oriented video game or app.

Leave it to 'Uncle' Al Morris, NYHC legend and original guitarist for such noteworthy Big Apple hardcore bands as Murphy's Law and Unholy Alliance, to finally take the concept and run with it. On March 10, Uncle Al will be launching 'MOSH PIT: The Game,' an iPhone and iPad app that replicates all the thrills, chills and smells of a real live pit.

Not only is Al a kick ass artist, but he can remember back to a time before there were words and terms like 'mosh', 'stage dive' or 'skank.' We'd say that makes him the perfect candidate to finally get such a concept off the ground.

Noisecreep tracked down Al to talk up the motivation behind making the app, the bands involved with the soundtrack and what he's been up to since his days as a musician.

When did the concept for Mosh Pit hit you? Was it an idea you had for a while?

The concept had been rattling around my head for a few years, but, finally, one day I pulled out a digital piece of paper and drew a rough idea of what a cartoon pit would look like; to be creative starts with a seed of an idea and a foggy vision. Once you plant the seed, the vision becomes clearer as you move from step to step. Soon it gets to the point where one idea leads to another and another and you end up with a flood of ideas and your vision takes shape

Give the basic gist of how MOSH PIT works.

MOSH PIT is a bit of mix of game, music platform and a virtual world entertainment device. The game angle is you set off your characters to create a 'total mosh'; meaning you get your 'moshnoids' to complete their routines which include stage diving, crowd surfing, jump in, circle pit, wall to wall as I call it, then finally a quick free style before jumping out. Before completing your routine you can get 'slammed' out by another character so you don't complete the routine. In order to get to total mosh, you have to complete eight routines within 100 seconds and avoid getting slammed out three times. At 'total mosh' everyone is in the pit and you rack up more points until the end of the song. After a bunch of tries one should be able to get it down. While doing so you get to enjoy some great hardcore music. 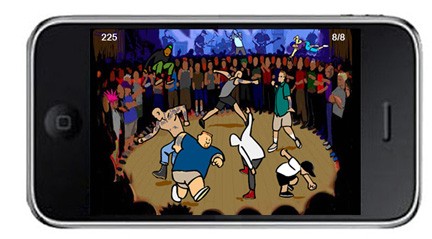 What bands are featured in the game? Why did you pick those certain bands?

First off, I'm doing this on my own - no company backed me on this - so I needed music. Now the bands I approached are all personal friends of mine from the NYHC scene going back to its very beginning. They're authentic; the real deal. I know this because I been to many of their shows. Most games either use generic music or pay a hefty fee to attract name talent. One thing to mention is that Facebook is my source of communications on all this. I looked up all the bands from there and gave them my pitch on how I wanted them on my game. They all were real supportive and went for it. For Killing Time I contacted Drago, the drummer, and he was all good. For Underdog, I talked to Russ Iglay and the same with him. Crown of Thornz and Sai Nam like wise. They weren't looking for a big payoff, just a cut of the sales that I offered and the exposure. Like me, they seem to believe in this project and could see that it has huge potential for everybody involved.

I choose these bands also because since it's the first version; there's more to come on this. I wanted a representation of old school roots, mixing up new school and then something real current like Sai Nam. My plan is to build a catalog of more bands, some of them old school but a mix of the new bands out there. Gotta support a new generation, yo, keep it alive and growing

Is this your first stab at designing an app/game?

I had once worked on a game in development a couple of years back as their storyboard artist. The game sucked but I did catch a glimpse as to how it goes down, but to be the overall designer was a real challenge. I had to do the game developer learning curve and it took a lot of research on the internet. My friend and cohort Bill Wilson from Blackout Records was a big help, now that he works for a game company. By the way, I'm doing this as an independent in the same manner as we made our music back in the day. I needed full creative control because nobody outside of our circle gets what this is about. 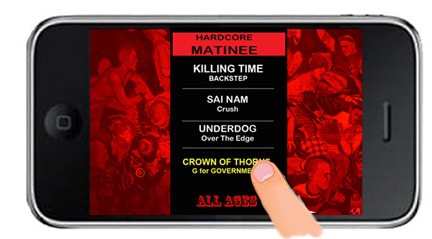 Why do you think no one else has tackled the idea of a moshing oriented video game before you?

It actually didn't start out as a point scoring game. After all, mosh pitting isn't about scoring points. From all my research I was told that to hold a person's attention to something you have to trigger their minds to stay with it and adding up points does that. So that was a nut to crack and finally I came up with the routine challenge. Most other games are sports, warfare where you add up kills or games where you build towns, pop balloons or get run over.

No one has tried this as far as I know. But my motivation - more than scoring points - is to, like the Murphy's Law song says- 'have fun.' It's fun to watch the characters go through their routines, fun to watch them slam into each other, fun to run up some points, all the while listening to great tunes. I like to say it's like having a mosh pit in your pocket. How cool is that?

Are the moshing characters based on real life people?

Yes, some are direct, others are composites of different people rolled up in one. Rat Bones was notorious for jumping off balconies, so I had to have him do that. Slim Kim is based on a great girl who hung with us back in the day; she could kick it strong as any guy out there. Terror is Terror, one of my buddies who is still around. The rest are composites. I have a whole bunch of other characters being developed for the series of upgrades I have planned, so eventually that crew is gonna grow.

So since being in Murphy's Law and Unholy Alliance, what have you been up to?

Well for now this, but if this thing allows me some extra free time and cash, I'm thinking of becoming the next Willie Nelson, only with a more punk/hardcore/ska/country flavor. Struggle blows and at my age, it's very tiring

Anything you want to say in closing?

Be my pal and spread the word, folks. Like my Facebook page! We're taking over one iPhone at a time. Yes, there will be an Android version eventually, but if you can't wait go to eBay and pick up a used iPod touch or get your girlfriend to download it on her iPhone. It's only $2.99, less than the cost of a bag of fries and a beer; cheap beer!