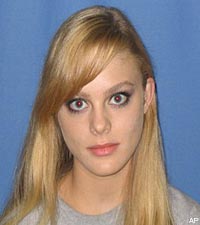 More than two months after Morgan Harrington went missing from a Metallica gig in Charlottesville, Va., police continue their search for the 20-year-old Virginia Tech student, who they say was drinking the night she disappeared. But the police aren't working alone. A dedicated group of people connected with FindMorgan.com has launched a new initiative that will focus on two items.

According to reports, the group is keen on finding two items that belonged to Harrington, who was separated from friends at the concert and was last seen wearing black boots, a black mini-skirt and a Pantera shirt. Those items are a red Kodak V530 digital camera and a silver and crystal Swarovski necklace. The group feels these items could hold the key to finding Morgan's current whereabouts and are seeking anonymous tips that may lead them to the items.

Virginia State Police believe Harrington is either being held against her will or is no longer alive, but are saying the case is far from cold. Police believe Harrington, who wound up on the outside of the venue where there is a no re-entry policy, hopped in a car after her last sighting on the Copeley Street Bridge Oct. 17 at 9:30 PM, and that whoever took her may be starting to show the strain of the crime.

One police spokesperson suggested locals pay special attention to the behaviors of those they know, saying, "if you've noticed a drastic change in someone's behavior, that is probably something we should know about. If Morgan Harrington was in fact abducted, that's a hard episode for anyone to keep to themselves."

Metallica bassist Robert Trujillo said in a recent interview that he hopes Morgan is returned safely. "I was crushed," Trujillo said, about learning of Harrington's disappearance; he added that the case has been ever-present on the band members' minds. "Stuff like this just really, really bums me out, especially when you are a parent and you have children. I mean, it's the worst thing that you could ever imagine. And of course, you know, we're all hoping for the best and just praying that she's alive. It really hit a sour chord with us and bummed us out."

Filed Under: Metallica, Pantera
Categories: News
Comments
Leave A Comment
Back To Top