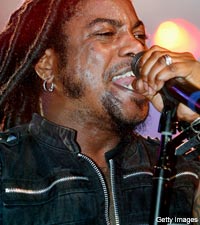 Five Points Music Hall recently reopened. The club has hosted a slew of legendary metal acts over the years and is now enjoying a renaissance. For Sevendust's part, the show was a mix of smoke, a swirling pit and heavy-hitting tracks. 'Enemy' was a crowd favorite, and Witherspoon dedicated some of the set to Americans stationed overseas in the armed forces.

There was also a playfulness to the usually all-business metal band. All the members of Sevendust seemed overly jolly and Witherspoon admitted to being tired. After all, Sevendust did a big show the night before for New Year's Eve and Witherspoon told the crowd he couldn't "hang" anymore and the night seemed "to go on forever." Despite the possible fatigue, this didn't stop Sevendust from packing in a high energy show -- asking the front of the crowd to walk in a circle to get a proper pit going. Between a mix of songs from all the Sevendust albums, kids jumped up and down and some of the older crowd members bopped heads around the bar area. Just like any real metal show, guys emerged from the pit shirtless, sweaty and sometimes a little bloody.

When it was encore time, Sevendust started mixing bits and pieces of their songs with other metal classics including Pantera's "Walk." This definitely helped end the night on a high metal note as evidenced by the excited screams of the crowd while exiting the building.

Lynam's set was a bit different. If Sevendust is straight metal, then Lynam is true rock 'n' roll. Despite the difference in genre, the crowd definitely swelled for Lynam and for good reason: The band plays around Birmingham several nights a week, so they were definitely a crowd pleaser. The band played songs from their albums 'Tragic City Symphony' and 'Slave to the Grind.' Much like Sevendust, they interrupted their own set for a classic with 'I Wanna Rock' by Twisted Sister. The band opened with 'Tanis' and proceeded to play their heavier songs, which was probably a good decision. The Sevendust crowd didn't seem to want any power ballads. At any rate, everyone seemed to get a kick out of 'Porn Star.' The short set meant lead singer Jacob Lynam didn't have much time to mock his fellow bandmates, but he did get in a few good jabs, proving the band is a good-natured mix of rock and humor.

Sevendust are heading back to the studio to mix their as-yet-untitled new album, due in April. Lynam have shows booked through March.