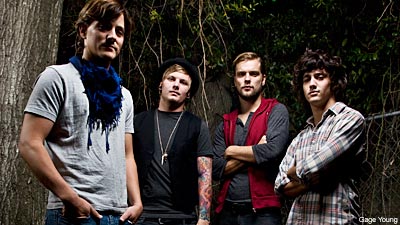 When Florida's Burden of a Day needed a new singer, the melodic hardcore band remembered the merch guy for Connecticut's Life In Your Way. Now, Kyle Tamosaitis debuts on 'Oneonethousand,' the band's third album, replacing Kendall Knepp who sang on 2006's 'Pilots & Paper Planes,' and 2008's 'Blessed Be Our Ever After.'

"This is actually the first album he's sung on," says guitarist Mike Sommers. "The only thing he's ever really done before is he had a band with some of his friends when he was in high school. So we're super excited about how it turned out and how well he did."

Knepp, who Sommers says Burden of a Day members "still loves to death," was giving indications to his bandmates that touring life was not for him anymore. He wanted to get married and settle down. When Knepp finally quit, Sommers, joined by his brother Josh on guitar, Terry Clark on bass and Chris Scott on drums, remembered Tamosaitis.

"He was a merch guy for a band we went on tour with called Life In Your Way and one of the bands, In Fear And Faith, had a singer and screamer combo and the singer wasn't able to make the tour because he was doing some last minute school stuff so every night Kyle would go up and sing one song with them," recounts Sommers.

The new album, 'Oneonethousand,' was produced by Andrew Wade (A Day To Remember, In Fear And Faith, Upper Class Trash) and the band was fully prepared to chip in and help with the lyric writing, but Tamosaitis was a natural.

"We knew that he's a very artistic person," says Sommers. "He went to college for art and we knew that he had a great artistic mind and we were hoping that would come out and it turned out amazing. He's got such a great thought process and he's very eloquent when he puts words on paper."

How has having a new singer impacted Burden of a Day's sound?

"It really helped our direction," says Sommers. "Kyle has an amazing singing voice which is what we always wanted to go towards, a more singing type music, and he provided the range and the ability to get that done. Combine that with the production of Andrew Wade and we came up with something that we think is awesome."

The band has just started the six-week Artery Foundation Across the Nation Tour with Emarosa, Our Last Night, In Fear And Faith, I See Stars, and Broadway, which travels all over North America until August 1.

"We still play some old songs live and it works great," says Sommers. "Along with a beautiful singing voice, Kyle's got a great scream which works great for us."

As for the future, Sommers says, "There might be more singing than screaming on the next album, but who knows? We'll see when we get there."

Download Burden of a Day Songs
Filed Under: burden of a day, BurdenOfADay, in fear and faith, InFearAndFaith, Life In Your Way, LifeInYourWay
Categories: Interviews
Comments
Leave A Comment
Back To Top