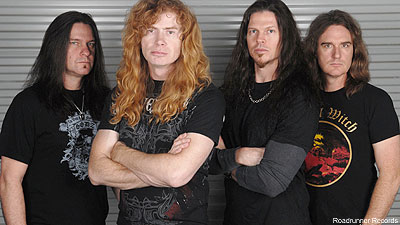 On May 17, 1995, a U.S. Army veteran and unemployed plumber in San Diego, Shawn Timothy Nelson, snapped and stole an M60 Patton tank from a nearby National Guard Armory. He drove down the highway, crushing cars, fire hydrants and an RV before he was stopped and killed by police.

The headline-grabbing story forms the basis of Megadeth's new video for 'The Right to Go Insane,' the second single from the band's acclaimed 2009 disc 'Endgame.' In the clip, which surprisingly features no performance footage, frontman Dave Mustaine is filmed sneaking onto a military facility, stealing a tank and playing crash-up derby through the streets. Video footage from the cockpit shows him singing and laughing, while shots from a surveillance helicopter depict a missile gunsight tracking him as he pillages.

"If I am going to carjack something, I'm going to do it Mustaine-style and go over the top like my new M-60 Abram's tank with a sunroof," Mustaine joked to Noisecreep. In addition to the action shots, there are numerous flashbacks of Mustaine's character fighting with his wife, being served divorce papers and finding a note on his front door notifying him his home was in foreclosure, the dramatized factors that led to his breakdown.

'The Right to Go Insane' was shot in South El Monte, California and directed by Bill Fishman, who also produced Megadeth's 'Head Crusher,' the Grammy-nominated first single from 'Endgame.'

"This video was a blast to film; Bill Fishman did a great job; even better in my honest opinion than our first video with him. But let me warn you, even though it looks like fun ... don't try this at home."

'The Right to Go Insane' is the first Megadeth video to feature bassist Dave Ellefson since 2000's 'Breadline.' In 2002, Ellefson left the band and only recently returned for the band's 'Rust in Peace' 20th anniversary tour.

Megadeth just finished up the U.S. 'Rust in Peace' dates and are about to head to South America, where they'll begin a world tour. Their first show is April 17 in Mexico City. Dates run through July 16 in Haapsalu, Estonia. The band's Canadian and American Carnage make-up dates with Testament and Slayer launch July 23 in Quebec City and run through Sept. 4 in Portland, Ore.


Filed Under: Megadeth
Categories: Interviews, Videos
Comments
Leave A Comment
Back To Top