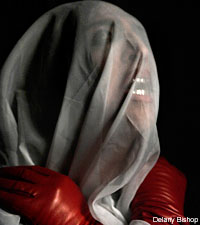 Marilyn Manson never, ever ceases to generate controversy in the mainstream media, which is due in part to his subversive appearance, his controversial associations and his boot-to-the-groin music. We spoke to Manson - that's Brian Warner on all legal documents and to his momma - during the midnight hour on the eve of the release of his latest album, 'The High End of Low.'

He was chatty, funny and highly intelligent, opening up without any hesitation about reuniting with Twiggy Ramirez, parting with actress Evan Rachel Wood, spending the holiday season a la carte and how he feels about his music inspiring random acts of violence. He's positioned himself as the role villain and he wasn't shy about addressing any topic we threw his way.

How much did your reunion with bassist Twiggy Ramirez spark the creativity on this record?

It's about me realizing the importance of loss, I even say, 'I am going to teach you about loss.' There are various degrees of things going on in my life and when you get back with a friend, you realize the void that it created, when it's back together. It was as if no time had passed. Separately, we did a lot on our own and we both can stand on our own. What we do together on this record, no one else can do. This is the record we wanted to make, at the right time, as friends. We needed each other. We had gone through parallel emotions with relationships and didn't have each other as best friends to say, "I am going through this torment."

He came to the plate with this music which sounded like what I wanted to say. It was intimidating, for me, that I had to take it up a level, and do and say something I had not said before. My part as the singer and lyricist took place between November and January 5. I finished on my birthday. During that period, I lived alone, which I had never done before. I had gone from living with my parents as everyone does, to starting a band, going on tour and living in hotels and in and out of different relationships. Then in November, the last relationship I was in ended with me living alone and it became a process. I spent, by choice, the holiday season alone!

You don't seem like a big 'holiday celebration' type guy!

I am not big on holidays, but I spent Christmas, New Year's Eve and my birthday entirely alone. I returned to the studio, did the last three tracks. I woke up thinking, 'I have to sing this song and finish this record,' which isn't about giving up what you are. It's about seeing what doesn't work and hating everyone and trying to destroy it. Without that feeling, the song 'Devour' would not exist. That's about a murder/suicide that almost happened and the song is why it didn't happen, so it began the record.

The person who wrote that song is not the same person who wrote the last track, '15.' I changed, people make mistakes. Now, I see that showing kindness and love shouldn't be mistaken for weakness. I am not desperate for love; it is something I have decided upon. I could have ended [the record] being null, like ['American Psycho's'] Patrick Bateman, without any sense of reality or contact with humanity. Track '15' is like when you walk out of theater, after the end title credits and what you didn't expect to happen...happened.

How much does this album have to do with the dissolution of your relationship with actress Evan Rachel Wood?

As that dissolved, I was discovering what I was supposed to be. My last album, 'Eat Me, Drink Me' was about a broken person, rebuilding and romance. It was very Shakespearean. As far as that relationship goes, it ran its course, I fought desperately to hold onto it. I was holding onto the piece of me that didn't exist, that I thought did. I mistook myself for the person who wrote 'Devour,' not track '15.' Everyone who knows me closely cries when they listen. I got the number '15' tattooed behind my ear. It's the new number of the beast.

There's a lot of "f*cks" on the first video track, "Arma-Goddamn-F*ckin-Geddon."

It's intentionally the most overuse of profanity on an album that I have ever had. On my albums, it's as though the parental advisory is built in. But when I say, "et cetera," it is the most important part of the song. I've seen on the news, stories about death, rape, murder and they tack on the 'et cetera.,' which shocks and amuses me. Such terrible things have become mundane and reduced people to 'etc.,'. I got 'et cetera' tattooed on my wrist. If I cut my wrist, I would cut through 'etc.,' which is triply ironic.

Etc. I am all about brevity.

Controversy is nothing new to you, but how are you handling it in 2009?

Starting with Columbine... it's like going back to the Beatles with 'Helter Skelter' in 1969. It was blamed for violence. 'Arma-Goddam-Mother-F-ckin-Geddon' isn't me being funny. It's sarcastic, and can be interpreted as funny, but when you are in the record, it's darker. But as for all the controversy, then I want credit for the death toll, I've been blamed for more high school shootings than anyone else in history, so I guess I want credit.

I don't condone or encourage any of this, but it asks the question: If people are worried about my music does, why don't they worry about what I am going to do? Blame Christians. I blame them for me not being able to be naked in front of women and be comfortable with it. I believe in spirituality, but as an artist, you make shit, put it in the world. Art is the question mark, not the answer and that is what I chose.

You definitely make yourself out to be the guy who relishes the fact the he shocks people...

It's a choice I have made to assert myself in the position of villain. It's a big responsibility [chuckles]. People always ask celebrities, 'Oh how do you feel about role model?' How about role villain? That's way harder. A model poses. The villain gets shit done.