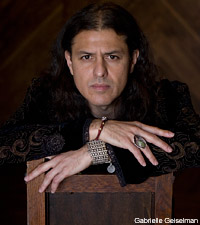 "At this point in our careers and at our age, it's all about satisfying ourselves in the long run and getting ourselves off ... and hopefully that will translate and get people off in the audience," states Oni Logan, frontman for Lynch Mob, to Noisecreep. "I think I can speak for George [Lynch] and for myself. It's all about the music."

'All about the music' for more than three decades, guitarist George Lynch has safely secured himself a spot in the annals of rock 'n' roll. After leaving Dokken, Lynch formed Lynch Mob with singer Oni Logan. Now, all these years later, the two are back working together and promoting their new album, 'Smoke and Mirrors.' Despite long and very different careers in the music industry, Logan and Lynch found their way back together -- with a lot of excitement still to come.

"We want to create the best kind of music we can and try to make people feel it. That's where our pay off is: if we can get people to dig our music," Logan says humbly.

For Logan, getting fans to "dig" the music might be one thing. For George Lynch, it's a matter of heavy metal legacy. Lynch's importance to metal and guitars isn't lost on Logan. It is, after all, a heavy burden to bear.

"Decades from now when they look back on George's legacy -- to have been a part of it -- I wonder what I'm going to say? All I can say is it's a blessing to have been part of George's legacy," Logan said. "To have recorded with him, to have written music with him, to have toured together. For me, George is George. I call him 'Jorge' in an endearing way. People perceive him differently and look at him differently than I do, because I write with him and we make music together. It's been a pleasure to go along for the ride."

You'll be able to catch Lynch Mob on tour during 2010.