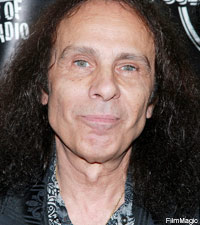 Friends and fans concerned about right-wing religious zealots from the Westboro Baptist Church protesting Ronnie James Dio's public memorial service needn't have worried. While a handful picketers showed up, their voices were drowned out by thousands who came to show their love and appreciation for one of the most powerful singers and most dignified individuals in the history of heavy metal.

"The WBC were laughingly irrelevant there," wrote fan Eddie Offermann on the official Ronnie James Dio Facebook fan page. "I've always been annoyed by their hate-mongering but there -- they might as well have been a troupe of clowns. Their weirdly irrelevant signs and the hate of a half dozen among a crowd of thousands who came to share the love of a great man who gave so much to humanity ... It was hard to care about them."

Aside from the barely noticeable troublemakers, the event -- which was held May 30 at the Hall of Liberty at Forest Lawn Hollywood Hills in Los Angeles -- was peaceful and respectful, but not completely quiet.

Additional footage from the event is available online.

Dio lost his battle with stomach cancer of May 16, two weeks before the fan memorial. He was 67.