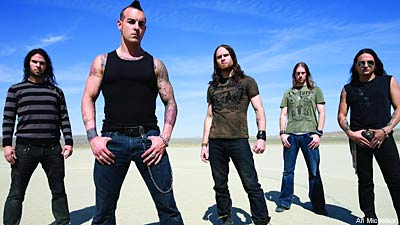 A year removed from the release of sophomore album 'Light It Up,' Massachusetts hard rockers Rev Theory still believe in the disc's hit potential. With singles 'Light It Up' and 'Hell Yeah' leading the way, the record's blend of pummeling guitar movements and slick melodies has helped them slowly reach a larger audience, most recently as part of Mötley Crüe's Crüe Fest 2 tour.

"I think it's a diverse album, with each song encompassing something we've been through," says rhythm guitarist Julien Jorgensen an hour before the group blasts through an intense Crüe Fest set on Aug. 18. "The singles were attempts to write hard-rock anthems, with each single getting a little deeper."

Those singles continue to see traction on the charts, with the third single, 'Far From Over,' clocking in at No. 17 on Billboard's Mainstream Rock Tracks. The somber track also appears on 'Acoustic Live From the Gibson Lounge,' a recently-released acoustic EP that also includes a cover of Metallica's 'Nothing Else Matters.'

Since the release of 'Light It Up,' Rev Theory has relied on a mix of marketing tactics to build a fan base. A partnership with World Wrestling Entertainment led to a performance at WWE's 'The Bash' in June and the use of 'Light It Up' as the theme music for WrestleMania XXIV. Meanwhile, 'Hell Yeah' was the first video to premiere on Xbox Live's video store.

The band's relationship with Monster Energy has also paid dividends. When Monster signed on to sponsor Crüe Fest's side stage, the company thought Rev Theory was a perfect fit to headline the stage. "Monster really stepped it up by giving us the headlining spot," says Jorgensen. "It's great exposure, and obviously, it's incredible touring with Mötley Crüe."

With Crüe Fest wrapping up Sept. 5, Rev Theory will continue supporting 'Light It Up' on the road and will soon shoot a video for its fourth single, 'Broken Bones.' While the band has some ideas for their next album, they will continue supporting their latest disc and keep anticipation high for new material. "We're a young, hungry band," says Jorgensen, "and we only know one way: Keep them wanting more."