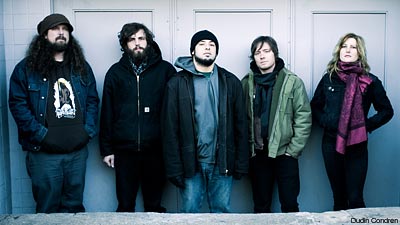 The sweet lads and lady of Kylesa have been unleashing a defining pummeling all their own since 2001. Then last year's 'Static Tensions' took the Savannah, Ga. band to new heights and new places with their captured sonic conflicts -- not to mention a wonderful recording using two drummers that avoid percussion overkill. Now the band has left what was their label home for three releases and have signed to Season of Mist.

"We're very happy to announce our new partnership with Season of Mist for the next Kylesa release, which we are hoping to get out later this year," the band commented on their Europe-based home.

The band added some details on their upcoming album, saying, "The writing process for the new record has been intense, taking up the better part of each day since January (that's why you haven't heard from us lately), but in return we have some new material that we're very proud of. The studio sessions at The Jam Room in Columbia start in May and end in early July."

Currently the band is in Europe making their way to Roadburn festival in the Netherlands.