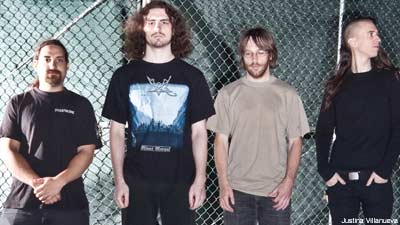 "We worked on these songs for a lot longer than the last album, and as a full band [this time], in addition to touring for three weeks right before we recorded," Barr tells Noisecreep. "Colin and I wrote three basic song arrangements each. We then fleshed them out as a band, with everyone contributing some arrangement ideas and bass and drum ideas. Nick wrote ['The Mountain'] solely by himself. The lyrics and vocals were added dangerously close to when we left for tour, and some things got changed and worked out while performing."

The album's stunning multi-layered cover art befits the title, and was designed by bassist Nick McMaster. "We had talked about having a cover kind of like Incantation's 'Mortal Throne of Nazarene' or 'Decimate Christendom,' explains Barr. "Then he surprised us with that."

'Dimensional Bleedthrough' is out on Nov. 10 via Profound Lore.