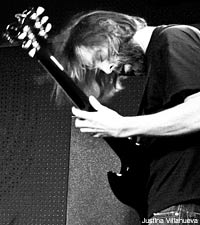 On April 10, 2008, I went to a Dysrhythmia show at a venue called Luna Lounge. But before the trio went on, another band with guitarist Colin Marston played. At the time, this writer thought, "How many bands could this dude possibly be in?!" Yet, exactly 21 months later, I found myself standing in front of the same exact stage watching that same band -- which at this point in time has been on the pages of all kinds of metal magazines (Decibel, Terrorizer, etc.) and many general audience and indie publications (New York Times, NPR, Spin, etc).

"Thanks to all the bands and to Zack for helping us with the show," Krallice guitarist and vocalist Mick Barr (Orthrelm, Oldest, Crom-Tech) said before playing the last song of the night.

It was the only stage banter that occurred during the band's mostly instrumental set at The Knitting Factory on Jan. 10. Along with playing guitar-centric songs from their latest release, 'Dimensional Bleedthrough,' they also played two really new songs that were recorded days before the show, leaving no room for vocals.

Unlike many other New York City based bands, Krallice doesn't play shows so often. And like any band with Thousand Caves' producer and engineer Colin Marston as a member -- he's in Behold ... the Arctopus, Dysrhythmia, Byla, Indricothere, Infidel?/Castro! and now Gorguts -- that is appropriately so. He's a pretty busy dude. Yet Sunday night's show was a different kind of work night for the band. It was also a chance for Barr to set up a show with three band's Krallice has a lot of love for: Humanity Falls, Ancient Wound and Crucifist.

Aside from Krallice's 'Dimensional Bleedthrough,' Barr is self-releasing a trilogy of Ocrilim CDs via his MySpace with a solo show at New York City's The Stone. Also, there is a new Behold ... the Arctopus lineup featuring drummer Weasel Walter, a new Gorguts album on the way and a Gorguts performance at Maryland Deathfest in May.

Also be sure to check out bassist Nick McMaster's and drummer Lev Weinstein's death metal project, Astomatous. Their only release is titled, 'The Beauty of Reason.'