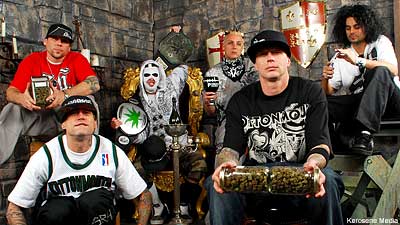 Kottonmouth Kings, the rapcore act known for their love of the green stuff, have a very simple stance and credo towards the legalization and reform movement. Frontman Brad 'Daddy X' told Noisecreep, "How could a plant that grows naturally be outlawed? I believe in nature's laws. I believe that it is the individual's right to choose. I would love to see freedom ring! I support anyone making progress towards sensible drug laws. There is no doubt our economy could use the infusion of tax dollars! I am a firm believer in legalization."

The Kings have been rocking for 14 years, and there is no secret to their staying power, either. "It's just enjoying what we do and fulfilling a common vision we share together," Daddy X said. "I think that amazing aspect of it is our loyal supporters and fans that make it possible for us to still be in business. If we listened to the critics and detractors, we would have been done years ago. But we don't. We trust ourselves and our instincts."

Aside from trusting their gut, the band runs Subnoize Records, -- also known as Suburban Noize, an independent label that they founded 15 years ago. "We have over 30 acts," Daddy X said. The roster includes a smattering of metal, hard rock and hip-hop acts, including (hed) pe, La Coka Nostra, Unwritten Law, Big B, Swollen Members, Dirtball, Potluck, Cypress Hill's Sen Dog, Mower, Taintstick and many others. The label is operated off a grassroots mentality that "defies any logic or trends," Daddy X admits.