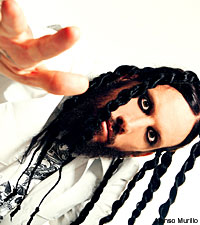 Former Korn axeman Brian 'Head' Welch remains a busy born again Christian. The artist is working on new music, signed up with a new manager and new bandmates and plans to tour next year.

"My first solo album, 'Save Me From Myself,' was more about the transformation that took place back in 2005 when I left Korn," Head told Noisecreep. "It was kind of a soundtrack to my book of the same name that I put out in 2007. This new record is more about who I am now. I've grown as a person so much, and I can hear the maturity in the music and lyrics big time. Another reason for the change in sound is the musicians that I'm connected with now."

Welch elaborated, "Rob Graves, who has been nominated for a Grammy and who worked with [the band] Red, is producing the album, and he is helping us shape this album into what it needs to be. I'm also working with my five new bandmates that I hooked up with last summer. They are amazing musicians and they're using their talents to help me push this record to be the best it can be." The new album will be released on Head's Driven Music Group, which is distributed through Ryko/Warner.

With his new cohorts firmly in place, Head plans to hit the road more in 2010 than he did in 2009! But he was first to admit that he would prefer to play support slots on the road. "I'm really looking forward to hooking up with other bands and hanging out with people that I admire," he said. Last year he recruited bassist Michael Valentine, guitarists Scott Von Heldt and Ralph Patlan, keyboardist Brian Ruedy and drummer Dan Johnson. "I don't want to headline tours if I can help it. I just want to open for bigger bands, so I can hang out and watch a concert every night, as well as connect with my fans before the night is over. I believe it's going to be a great year for touring in 2010 for us, and I'm confident that William Morris/Endeavor will help get us where we need to be."

Head, who is a single father of his daughter Jennea, is still uber-serious about his commitment to Christ, but isn't bashing listeners over the head with the message, so a secular audience and Korn fans uninterested in a Christian message can still enjoy the artist's music. Head did offer a very personal, easy-to-relate suggestion about something as simple in Christian doctrine as prayer! "Prayer is about a relationship," he said. "That's what God wants. He wants people to believe that He is real so that we put our effort into building a relationship. Jesus is everywhere because His spirit was poured out on the earth after the cross. You can talk to Him when you're in bed, going to the bathroom, taking a shower, driving to work, anywhere, anytime. All God wants is for people to believe, and to prove that they believe by actually talking to Him every day. It's really simple. The door is open; all we have to do is walk through it."

Same can be said for Head's post-Korn music. Fans can check it out or miss out if they choose!