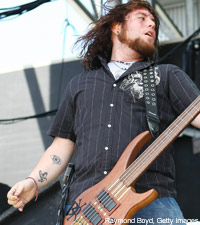 The recording process for Saving Abel's sophomore effort has become an inside joke within the Corinth, Miss.-based rock quintet.

"We got a joke going that we're trying to record it in as many studios as we can," bassist Eric Taylor told Noisecreep. "We stay out on the road, so it's kind of hard to go home to our studios. We've recorded in Florida, Detroit and a bunch of different places."

The album, produced by Skidd Mills -- who also turned the knobs for Saving Abel's self-titled debut -- has a bit of a harder edge so far, Taylor explained during an in-person interview on the band's tour bus in Glendale, Ariz.

"It's a little different," Taylor said. "It's [edgier]. It's got a little more heaviness to it. We've got a couple ballads. We're Saving Abel, and we have to have a couple ballads on there."

The band, which scored hits with 'Addicted,' '18 Days' and 'Downing (Face Down),' has been penning the as-of-yet untitled collection since 'Saving Abel' was released in March 2008.

"We're always writing," Taylor said. "We started actually getting the songs together and figuring out which ones we want to record. We've got about six of them done. We've probably got 15 or 20 to pick from now, to add to the rest of the album."

This process has been more of a collective one, with each of the band members contributing to the songwriting. Saving Abel also includes lead singer Jared Weeks, rhythm guitarist Jason Null, rhythm guitarist Scott Bartlett and drummer Blake Dixon.

"On the first album, Jason and Jared, our guitarist and singer, kind of wrote the majority of it," Taylor said. "Then we came in, and the rest of us helped write the rest of the album. This one, everybody brings ideas to the table. I bring something to the table or our drummer will bring something. We always work on it. We send it to our producer and he gives his input on it. He sends it back. Luckily for e-mail and Pro Tools and stuff, he can send back music. You can sing something over and send it back."

As Taylor spoke to Noisecreep, the band's stint opening for Nickelback was winding down. On Oct. 27, the act will begin headlining the Class of 2009 Tour, also featuring Red, Pop Evil and Taddy Porter.

"The concept of the tour is class of 2009," Taylor said. "We have three charting bands. We're headlining, we've had three Top 30 hits we're very proud of. Pop Evil's had some great radio play, so has Red. So it's three bands that have great radio play this year and a freshman, which is Taddy Porter.

"They're an unsigned band that I think is going to be the next Black Crowes. I listen to them almost every day. Amazing group of guys. Amazing musicians. They've got this hippy jam, like [Led Zeppelin] meets the Black Crowes. Just a hippy jam. I believe they're going to be a great band."