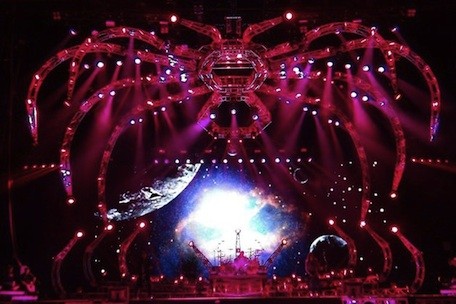 Rock legends Kiss refuse to rest on their laurels when it comes to showmanship, as evidenced by the premiere of their anticipated mechanical spider over the weekend. Descending to the stage with the help of a gargantuan web crawler that would make Peter Parker jealous, the band kicked off the European leg of their 'Monster' tour with their trademark audaciousness, as an estimated 40,000 fans at Friends Arena Stadium in Stockholm, Sweden cheered on.

As promised by Gene Simmons, the spider did shoot fireballs from its tentacles towards the end of performance, and this impressive spectacle may end up being one of the group's most memorable stage shows. Shot by Keith Leroux for KissOnline, the three-minute video posted below has the band in fine form, as they projected enough charisma to fill the 70-foot screen behind them.

Songs in the set included many of the band's more popular tracks, including the tour debuts of 'Heaven's on Fire,' 'Say Yeah,' and 'Let Me Go, Rock n' Roll.' With last year's release of 'Monster,' their 20th studio album, the group are in the midst of a creative resurgence, and the new stage set, as well as their busy touring schedule, are proof of their increased vitality.

Gene Simmons puts it best in a recent WhoSay posting about the addition of what he describes as the "spider monster": "We intend to go into overdrive," said Simmons. "This is just the beginning." The group will celebrate their 40th year anniversary this New Year's Eve and lounging like couch potatoes simply won't cut it.