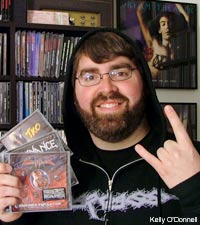 We all know the metal community is filled with record-collecting fiends, but there are some people take their obsession to the next level. Matthew Rudzinski definitely falls into the latter category. He's the kind of metalhead who gets off on finding some forgotten Swedish Dokken sound-alike band that released an obscure album in 1987. He's also the type of guy who would tell everyone he knows about said band. That's why he's the exact person who should be running Divebomb Records.

The label reissues little-known yet great metal albums from bands like TKO, Uncle Slam and Sargant Fury. This labor of love is a passion project for Rudzinski, but it's some kind of miracle that he even finds time to do it. You see, he's also the frontman for metalcore outfit Killwhitneydead. -- and if that wasn't enough, Rudzinski also runs Tribunal Records. The long-running label has released records from the likes of Atreyu and He Is Legend, among many others.

The more Noisecreep learned about Rudzinski, the more we knew we had to track him down to talk shop.

You already have Tribunal Records, plus you sing in Killwhitneydead. Why would you want to take on the responsibility of starting another label? Are there enough hours in the day to handle everything?

Well, as I am getting older, I find myself drifting back to my roots, so to speak. I listen to a lot more albums that were released in the '80s and 90's than anything current. So one day I made a list of my favorite out-of-print albums I would like to see released on CD, and I just decided to go for it. It is pretty busy juggling all three things at once, especially during the summer months when KWD goes out on its annual U.S. tour, but I make sure I find the time for Divebomb -- even if that means working until the early hours of the morning. I never mind the long hours, because I am doing what I love to do.

Metal Mind Productions out of Poland and Rock Candy Records from the U.K. are two labels doing something similar to what Divebomb is doing. Did you reach out to them or any other reissue labels for advice?

It's funny you mention Rock Candy and Metal Mind as they are both big influences on what I am trying to accomplish with Divebomb. Those guys have been in the business far longer than I have been and seem to have more connections at the moment, but I am working to remedy that as we speak. I have e-mailed Rock Candy's owners, submitting my ideas for titles that I think are currently beyond my grasp but would still love to see reissued ... They have sent back replies and such, but nothing as far as advice has been exchanged.

I have found it to be quite a competitive market and many labels don't like to reveal what they have planned, but there are several labels out there with owners who don't mind discussing things. Lost & Found Records (another original influence for me) and Stormspell Records are also both great reissue companies and we bounce ideas off each other all the time. We figure there is enough material out there gathering dust at the moment that we can all do our own thing and reissue the bands we love while sticking together and promoting classic metal/hard rock as a whole.

If you believe what you read, this is the worst time in history to start a record label. How tough has it been financially on you?

Tribunal's industry woes could be an entirely different interview, but as far as Divebomb it's not so bad because the fans seem to understand what I am trying to do. I am trying to promote 'tangible artistic substance' in an ever-expanding digital world. I come from a time in the music industry when we bought vinyl and spent hours going over the liner notes, reading the lyric sheets, and really spending time absorbing the music. I fear with music continuing down its digital path we are losing that connection and I am choosing to fight back and make my stand.

Some people call my hopes a pipe dream or even that I am being stubborn and delaying the inevitable, but I love the physical artistic aspect of music and I truly believe there are others out there like myself. So I push forward doing what I do until I can no longer do it.

You've only pressed up limited quantities of your Divebomb titles. Do you find that just announcing that helps get the collector junkies to respond?

Totally, it always helps make sure people act a little more quickly. But at the same time I have found there really isn't a need to do massive runs of these reissues. Sure, some bands are/were more popular than others, but it doesn't mean all the fans are going to want to make a purchase or in these financial times even have the monetary strength to do it. But I did start Divebomb for the inner record collecting junkie in us all that we constantly try and keep appeased.

You've picked to release some semi-known acts like TKO and Uncle Slam, but you also have bands on the release roster like Oracle and Sargant Fury, which are much more obscure. When you choose to reissue a title, how much does the fact that most metal fans haven't heard of the group play into the decision process? That has to be a gamble in a sense.

Honestly, not much. If I love an album then I am going to release it because I seem to have pretty good taste when it comes to music and figure there are other people out there with similar tastes who will enjoy what I reissue. For instance, I buy everything Rock Candy puts out regardless of whether I have heard of the band or not. I am loyal to their cause and I trust their judgment to guide me into finding albums I may have never had the pleasure of hearing before and I hope to do the same for Divebomb fans.

Do you usually approach a band member or someone who might have worked at the label that originally released the title you're looking to reissue?

Yes, I begin trying to track down the band members first because ultimately I want them involved with the project from the start. They are the ones with old show flyers, band pictures, live videos, demo rehearsal tapes and all the things I try and include to make Divebomb reissues special for the fans. Plus, I try and do new interviews with them looking back and discussing their origins, tour stories and anything relevant that the fans might want to know about.

Has it been tough to get a hold of members of these older bands?

It goes both ways sometimes. Some were impossible and others were quite easy to connect and even comical. For example, Bauke of Sargant Fury runs the German record label to which my band, Killwhitneydead. is signed to. When I signed the KWD deal with him, no bells went off in my head, but two months later I was looking at my original copy of Sargant Fury's second album, 'Little Fish,' and came across his name and was like, "No way, it can't be him!" He was shocked that I even knew Sargant Fury was a band being the vocalist of an extreme metal group called Killwhitneydead. But I assured him I was pretty much a Sargant Fury fanboy [laughter].

Have you been approached by any bands looking for someone to reissue one of their out-of-print albums?

Yes, not many so far, but there have been a few. I am always open to new ideas from bands. I ask people all the time about their favorite albums and what they would love to see re-released. I enjoy finding new bands I missed originally but whose music is still inspirational to people 10 to 20 years later. That really says a lot to me as a music fan. Many of the titles I have released so far are bands that I had a connection with in my past, but there are some things on my to-do list, and one of those things is reissuing bands that friends and fans have turned me onto more recently.

Well, I'll tell you about the ones I can discuss at the moment since some are still in the works. I have 'Desolate Kings: The Oracle Anthology,' from North Carolina's Christian metal pioneers Oracle. Divebomb will also be releasing the self-titled about from Casanova, a German hard rock outfit from early '90s. People should also look out for a reissue from Florida's cult tech-death-thrash heroes, Elysium and their fine album, 'Inspired Hatred.'

Then I have two releases that were originally released on Tribunal in 2003 and 2005 respectively, but unfortunately stuck out like sore thumbs against my mainly metalcore roster so I have decided to give them a proper reissue within a more accepting and caring circle of fans. Those two would be Widow's 'Midnight Strikes' and Line of Fire's debut self-titled album. I have several more titles that I am working on at the moment, but we are just in the discussion stages so I don't want to get ahead of myself just yet.

Have there been any records that you wanted to reissue on Divebomb that for whatever reason couldn't get off the ground?

For sure, and it pains me [laughter]. The ones that come to mind are Confessor's 'Condemned,' Sound Barrier's 'Speed of Light,' and Jagged Edge UK's 'Fuel for Your Soul.' However, I have not given up hope on any of these for the future, but they have definitely been halted for the moment.