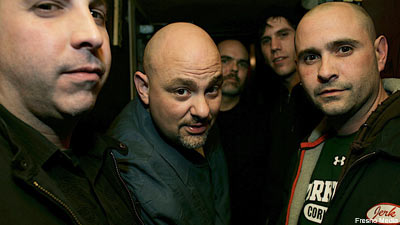 It's a tradition for hardcore bands to talk about the music itself and a punk rock lifestyle in general -- and in plain, no-frills terms. New York City's Killing Time follow in these time-honored footsteps on 'Flight Plan,' a track off their new album, 'Three Steps Back.' "I wrote that song not long after we returned from Japan in the fall of 2007," bassist Chris Skowronski, who penned the song's lyrics, told Noisecreep. "It's basically about the feeling you get after you come back from tour and find yourself back in the daily grind of the 'real' world. Coming back and suddenly having to get up, go to work and be a normal, responsible person kind of messes with your head."

Skowronski wrote the words after the band arrived home from a tour of Japan a few years ago. That, coupled with the band's long history within the hardcore scene, were an artistic motivation. "We've all been playing in bands for 20-plus years because it means something to us, and there really is nothing like being able to travel and play every night," Skowronski explained further. "So leaving that behind and returning to the life of a working stiff -- with all of its pressure to kind of give up hope and commit to a more conventional life -- can be kind of soul-crushing at times. So anyway, that's why the lyrics probably come off a little dark."

Skowronski pointed out that the first line is actually a reference to another Killing Time song, titled 'Cayce,' from a previous release, 'The Method.' "That lyric is 'Alone, even my thoughts are elsewhere,' which I will admit is a far superior lyric than the one I wrote off of it," Skowronski humbly confesses. "[Killing Time drummer/lyricist Anthony] Drago wrote the lyrics to 'Cayce,' and he writes the overwhelming majority of KT lyrics. All of them are brilliant. I really can't say enough about some of his lyrics on both 'The Method' and the new record. In this song, I was just trying keep up."

There was some question on how the lyrics to the chorus sounded, and Skowronski asked a bandmate for an opinion. "I remember asking [guitarist] Carl if the 'f--- it' and 'f--- them' parts in the chorus were a little cheesy, but I think we decided that it just sounded right and that if we were kids, we'd be into it."

The CD release party for 'Three Steps Back' will take place in Brooklyn, N.Y.'s The Knitting Factory on Feb. 27.