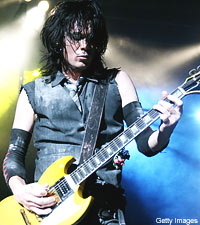 Summer concert rumors are pounding every corner of the Interweb. Think of the already confirmed package of Def Leppard, Poison and Cheap Trick. All three acts enjoyed a ton of success in the 1980s. Slam dunk for fans, right?

Mötley Crüe will officially announce Crüe Fest 2 on Monday, March 16. The rumored bill recently leaked and threw the Crüe faithful into a snit. See, Mötley might tour with Godsmack, Saving Abel and Theory of a Deadman.

Guitarist Keri Kelli (pictured) sees no issue with Mötley's rumored touring decision. The Alice Cooper axeman tells Noisecreep, "I believe there's a lot of great new talent out there and influence comes from many places. As for touring with newer acts, I also believe this is a great way to bridge the gap between older established bands and newer rock fans that are perhaps just discovering them through a new source."

Is being seen as "current" worth it for bands like Mötley Crüe to tour with a bunch of mismatched acts? Maybe in this economy it's a "throw it all at the wall and see what sticks" sort of mentality. For most fans, concerts are less business and more excuse to relive their youth. Or to drink profusely. Usually the latter will do.