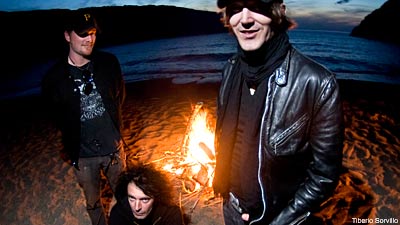 After a decade of dormancy, Karma to Burn are being exhumed. "We felt we left quite a few unanswered questions out there," Karma to Burn bassist Richard Mullins told Noisecreep about the band's recent reunion. "Mostly, how long can the three of us as individuals rely on others to take care of our deep-seated issues?" The new material is currently being hammered out, with Mullins saying, "Remember that bad-ass flaming-skull forearm tattoo you sketched out in the 11th grade? Yup." That's how it's going to sound. Raw and bad-ass. That's how we perceive his comment!

Issues aside, Karma to Burn have attained cult status in the doom rock scene through the years, thanks to their molten and leaden, and not to mention, vocal-less, guitar assault. "I am certain people expect us to use this 'status' to feed our egos to the point of borderline insanity, but what they don't see is the sea of tragedies and heartaches to have befallen us over the course of our career that already teeter us meticulously on the very edge of dementia," Mullins also said.

Some of the 'triggers' that have pushed this West Virginia trio to the brink of extinction, besides their obvious humor, include guitarist Will Mecums common allergy and double-wide move! "Take Will for instance," Mullins said. "At age 26, it was discovered that Will was allergic to penicillin. When he was 28, his family relocated from Westover Trailer Park to nearby Sunnyside Trailer Park, a move that traumatized Will for several weeks. In 2001, Will had a blurb as the Village Voice's most innovative guitarist, but that was tainted by a recurring sinus infection, a prized Mötley Crüe mirror breaking during another crosstown move, an ankle sprained while playing softball at a picnic and a pet salamander dead before its time. So to be honest, we concern ourselves very little with how others view us."

Hailing from the much-maligned -- at least in the press -- state of West Virginia is another element that adds to the mystique of Karma to Burn. When asked to clear up any misconceptions about the state -- since it's really so much more of a beautiful landscape than the haven of toothless rednecks, as it's been portrayed -- Mullins was quite coy, saying, "That is a secret that, much like our sisters, is better left untouched."

The band will release 'Live 2009 Reunion Tour' DVD via Napalm Records on Dec. 15.