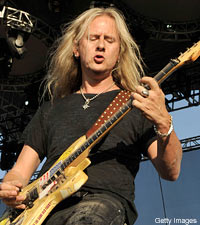 Don't expect to find out when Jerry Cantrell is grocery shopping, unless you happen to be behind him at the checkout. The guitarist and co-vocalist for Alice in Chains will not be partaking in the social networking time depleters known as Facebook and Twitter.

"I don't Twitter. I don't Facebook," Cantrell tells Noisecreep emphatically. "I think it's ridiculous that people are that important that people really need to know they are going to the grocery store or what club they are at [laughs]. I think it's pretty ridiculous and self-indulgent."

Alice in Chains have been touring the past couple of years with new frontman William DuVall, and will drop their first studio album since 1995, 'Black Gives Way to Blue,' on Sept. 29. AiC has long had a MySpace page, presumably not managed by Cantrell, and has a dedicated Web site. But as more and more musicians interact closely with their fans on Facebook and Twitter, Cantrell says, "I'll interact with my fans when I see them."

He continues, elaborating on his distaste for today's internet trends, "We do our Web site, and that type of stuff, but I'm not interested in [social networking] at all. You shouldn't know that much about people, you know what I mean? Because when it really comes down to it, people aren't that f---in' interesting. They really aren't.

"It's more than a little creepy," Cantrell says. "You shouldn't know everything. Everything shouldn't be so transparent. There should be a little mystery and magic to life, and also people should have a little bit of privacy. Everybody deserves a little bit of that."