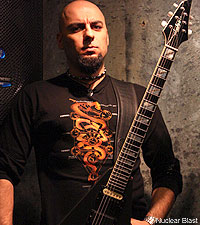 Israeli-based black metal band Melechesh will enter Babajim Studios in Istanbul, Turkey on April 10 to record their yet-untitled fifth album, the follow-up to 2007's 'Emissaries.' The band plans to spend between four and five weeks tracking the disc. Melechesh chose to record in Turkey because of it's vibrancy and historical significance to the band's Sumerian and Mesopotamian themes.

"We have been looking for a place to record that can offer us an inspiring surrounding," frontman Ashmedi said. "We also decided to stay true to our spirits, to break the mold again and also to defy the norm. Hence, we will record in Istanbul. The norm is to record Westwards, [so] we want to head Eastward. Istanbul seemed the best place, since this is the city where the East and West meet, mesh, clash, blend and collide and has been as such for millenniums."

Ashmedi added that the disc, which is tentatively scheduled for release this summer, should appeal to anyone who's ever liked the band. "The music is definitely Melechesh, and as always, this album has its own characteristic," he said.