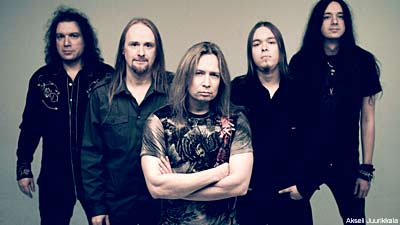 "If it does not hurt, it cannot be good." That's the theory that Stratovarius drummer Joerg Michael subscribed to when making the performance video for his Finnish band's song 'Deep Unknown.'

"Honestly, it was not fun at all, it sucked huge donkey c--- .... sorry," Michael told Noisecreep. "Actually there was this big windmaker fan. As soon it was on, it blew the bloody fun out of your butt in less than a second and made your eyes starting crying and itching in less than a minute. It was in Finland and it was cold and there was no beers and, and, and ... But we definitely tried to put on a very intense working performance. And it is true, it was fun, other than those reasons. We finally could do a video, with all the blood, sweat, tears and pain it takes."

'Deep Unknown' appears on Stratovarius' album 'Polaris,' its first without longtime guitarist Timo Tolkki. Upon his exit, rumors abounded that the band – which now includes vocalist Timo Kotipelto, guitarist Matias Kupiainen, bassist Lauri Porra and keyboardist Jens Johansson – was going to break up. Even Michael thought about giving it up.

"It was not easy, I tell you straight," Michael said. "I even was so down at one point that I was seriously considering giving it all up. Playing the drums for me was immediately triggering negative vibes in my brain about ignorant record companies, too much people around just focusing on money, insane former band members starting this statement blitzkrieg on the net about 'I was doing everything right the last 12 years just the singer and drummer suck huge donkey c---.' I think especially Timo, Jens and me talked a lot also – sometimes whole nights over the phone, got drunk and playing with a lot of idea what we can do with the rest of our lives.

"I guess in the end it was Jens with his always-positive approach to everything and the fighting spirit of Timo Kotipelto who definitely wanted to come back which rescued the band," Michael admitted. "And, now we are back and we do what we really want to do. We are not calling our management asking what the lawyer did say yesterday, not checking in the net (seeing) what other people wrote about you, coping with the lies. We just play music, that's all, can be easy sometimes."

That's exactly what the band did in the studio – focus on its music. Being with new members Kupiainen and Porra renewed Stratovarius' sense of excitement. "We got together in a cottage in the middle of Finland to start recording ideas, riffs and other stuff that the others have collected over the years. The cottage was far away from any civilization, not exactly the end of the world but you could see from there.

"After a short while, let's say three months, we went to a nice cottage in the east of Helsinki, where we lived in a forest, with a lot of beer, vodka, sauna and music," Michael said. "And started the real playing and recorded the drums at the same time. From that point on, everybody went to different places and studios and recorded the other instruments like bass, guitar and vocals in the 5by5 studios (belongs to Matias), and keyboards were recorded in the living room of Jens' apartment."

Then the band, which begins a North American tour in September, passed over the music to mixer Mikko Karmila. The entire process took about a year. Michael said Kupiainen and Porra's influence can be heard on 'Polaris.' "Matias brings more progressive elements to the whole thing as you can see with 'Deep Unknown,' what is one of his songs," Michael revealed. "In general, after so many years, we have, of course, done so many things that it's kind of refreshing having new ideas from new people. And sometimes they also bring ideas we do not think fits quite well but you can see it as new injection of fresh blood really.

"Lauri brings more innovative sound-collage kind of ideas and carries the melancholy style you always found in Stratovarius to a new level. But, discussing about music is different, maybe everybody sees it differently. Personally I think the new album is much more in the traditional way of Stratovarius music than the last album, even though we have two new members playing on the album."