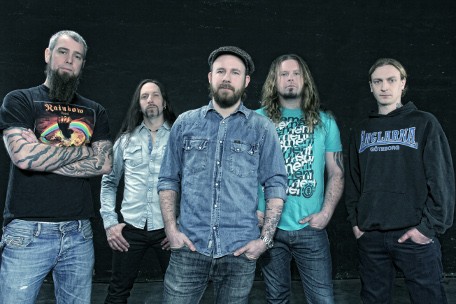 It isn't very often a metal band gets far enough in their career to release their 10th studio album, but that's exactly what In Flames did earlier this year when they unleashed 'Sounds of a Playground Fading.' But what makes the record an even rarer feat is how vital it is.

Throughout its 13 tracks, 'Sounds of a Playground Fading' In Flames temper the more overtly melodic side of their sound and hone in on the heavier aspects of it. Many fans have compared it to the band's 'Clayman' (2000) album, and it's hard to argue with them. The result is the Swedish group's most fully-realized songwriting in years.

Noisecreep is proud to present the exclusive premiere of 'Where the Dead Ships Dwell,' the spooky new video from 'Sounds of a Playground Fading.' Director Patric Ullaeus has collaborated with the band before, but with this clip he delivers his finest work yet. More than just another run-of-the-mill music video, 'Where the Dead Ships Dwell' looks more like a long-form trailer for a David Fincher-directed horror film.

On Nov. 15th In Flames will release a special digital single of 'Where the Dead Ships Dwell' that will feature there completely different remixes of the track. With versions by German rapper Casper, drum and bass act The Qemists and Kristof Bathory, vocalist of the black metal band Dawn of Ashed, there should be something everyone can enjoy.

"The songs have already been made and the originals are as good as they can be, but what if I give them to an artist from a whole different genre, what would be there take on it?" Says In Flames vocalist Anders Fridén. "I love collaborations like this and all the artists we worked with have done an awesome job. It's not meant to be taken dead serious and it's not how In Flames is gonna sound next, but I love it and I hope you'll enjoy a twist to the formula."

The track listing for the single is as follows:

In Flames' 'Sounds of a Playground Fading' is out now via Century Media Records.