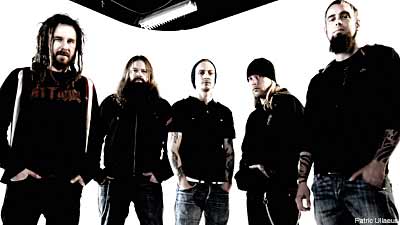 Our fave Swedes, In Flames, are ready to lay waste to American venues this fall. They're hitting the road in support of their latest album, 'A Sense of Purpose,' which was their first effort for E1, after stints at Nuclear Blast and Ferret. This also marks the band's first headlining run since fall 2008, so it's about damn time they've returned, bringing their melodic moshability and guitaristry back to the States.

"After a few select European festivals and some well-earned rest, we are ready to unleash some of our Swedish metal upon U.S. soil," frontman Anders Friden told Noisecreep about In Flames' upcoming American tour. "There'll be songs we haven't played in a while, and of course, a lot of your live favorites. It's a great bill with The Faceless, 3 Inches of Blood and Between the Buried and Me, so expect it to be one long and brutal night. I can't wait to see you in the crowd."

Who out there is taking bets about what tunes will make it onto the set list? The tour kicks off September 18 and runs through October 6.

In Flames Tour Dates
on TourTracker.com

Filed Under: 3 inches of blood, 3InchesOfBlood, Between the Buried and Me, BetweenTheBuriedAndMe, in flames, InFlames, the faceless, TheFaceless
Categories: Interviews, Tours
Comments
Leave A Comment
26 Bands Who Sound Nothing Like Their First Album
The 10 Best Album Sequels in Rock + Metal
Artists Answer – What Song Are You the Most Proud of?
Slayer, Meshuggah, More Metal Featured in ‘Saints Row’ Video Game Reboot
In Flames Announce 14th Studio Album, Drop Crushing New Song ‘Foregone, Pt. 1′
10 Best Rock + Metal Songs That Don’t Have a Chorus
Trivium Book Fall 2022 Tour With Between the Buried and Me, Whitechapel + Khemmis
Judas Priest, Bullet for My Valentine, Jinjer + More Withdraw From Aftershock, Replacements + Daily Lineups Announced
In Flames Debut New Song, Announce 2022 Tour With Fit for an Autopsy, Orbit Culture + Vended