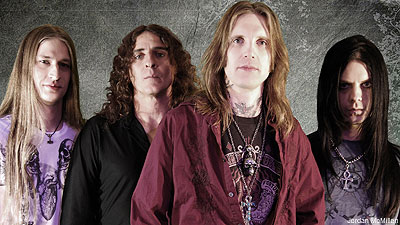 Their parents might have thought otherwise at the time, but the years that the members of Icarus Witch spent playing air guitar to their heroes Iron Maiden were ones well spent. This winter saw the Pennsylvania classic meta-influenced band release their third album, 'Draw Down the Moon,' and celebrate it with what can only be called a career high.

"It's definitely a pinnacle, because in a few hours we're going to be onstage in Austin, Texas opening for [former Iron Maiden vocalist] Paul Di'Anno," bassist Jason Myers told Noisecreep the day after 'Draw Down the Moon' hit store shelves. "Our guitar player was mentioning earlier that when we were young we'd be in our bedrooms playing air guitar to Iron Maiden and now we get the chance to go out every night and play those roles live."

Myers says serendipity played a part in the hook up, as both Icarus Witch and Di'Anno are signed to Cleopatra Records. "We were in the right place at the right time," said Myers. And with the right sound: When Di'Anno was looking for a U.S. backing band, the Iron Maiden-influenced Icarus Witch was a no-brainer. Myers added that he feels Icarus Witch have paid some dues since forming in 2004. "It feels like a long time in the making. We're in this band every day; we spend our time clawing at the next rung of the ladder. What we're getting now is a bit of a reward for persistence. We refused to go away and take no for an answer. I guess that's the only way to make it in this business. Just stick together and keep going forward."

As a bass player, Myers said taking on Maiden leader Steve Harris' parts is both weird and cool. "It's a strange challenge; it's a unique situation. As a bass player, Steve Harris is god. I couldn't hold a candle to him, but that doesn't stop me from at least trying to play the role of those parts to some degree of satisfaction. It helps that that's what we grew up learning."