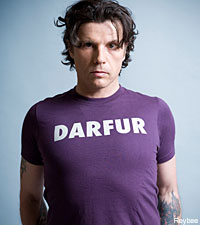 A longtime interest in Native American culture has led the Cult singer Ian Astbury into a career as a filmmaker.

"I have a documentary I'm working on called 'Conquest.' The subtitle is 'Sexual Violence and American Indian Genocide,'" Astbury said during an interview with Noisecreep.

"It's to do mainly with matricide. It's to do with the fact that when patriarchal cultures move in to an area for manifest destiny, certain elements of that is to take over the existing populous. And when you have an indigenous population in the United States, the Native Americans, they knew to go for the women as a way to kill off the people. It bleeds into modern times with what's been going on in reservations and those communities, forced sterilization, sexual abuse and violence in these communities, the culture's been stolen away. Such indignation have been practiced and perpetuated."

Astbury explained there's a long litany of violence perpetuated against women. He said the gender issue comes into play as well in the documentary, based on work by Nobel Peace Prize-nominated author Andrea Smith.

"We live in a patriarchal culture still and we still can't get over the fact that we need to have men leaders," he said. "(The documentary) goes very deeply into the ethnic genocide, the matriarchal elements and then it goes into gender issues of modern day. When 'Sex and the City' is supposed to be representative of feminine power and doesn't disclose any kind of real spirituality or real connection to the fact that we depend on a ball of hydrogen burning at whatever amount of degrees it is to keep us alive everyday or oxygen or this planet which is a feminine aspect. I'm thinking that culture's one of the hugest things we're suffering from. It's like the big white elephant in the room that nobody wants to talk about."

He said he is using the Native American theme to break into these issues.

"America is still the most important cultural leader in the world," Astbury said. "I think America, as collective group, will work together, not excluding anyone, or pointing fingers at anyone. It's not about blaming anybody. It's just like saying, 'Let's see where all are together. Let's look at this. Let's deal with this and let's get this healed or work toward healing it.' It's in production right now."

Also on his plate are two short films, one of which is "Ruins." The film is set on the Pine Ridge Indian Reservation in South Dakota.

"It's about two star-crossed lovers--a young boy and a young girl," Astbury said. "They're in a city, an urban culture, (where) gang culture is being appropriated by a lot of the reservation-dwelling natives. They've completely absorbed that into their culture so you'll see like your mates wearing Tupac T-shirts, gang signs that are (used) with Hispanic and African American gangs in central urban areas. You'll see the same kind of use of gangster rap and colors and all this gang paraphernalia. You'll see that in native areas. The Pine Ridge reservation is rampant with it. So it's a very volatile environment. It's an environment where there's no real way out. The story's about a young woman who wants to break out of that environment. The story's gonna be told in nine minutes. I'm going to write the soundtrack for it, direct it as well as cast it. Hopefully I'll be shooting it in July."

The second short film is "We Defy," a reveal of a special forces unit that has just come out of the combat zone.

"It had just been airlifted out by helicopter and it's about their emotional response after a conflict," Astbury said. "We don't see the conflict. We just see them going through the process, coming apart emotionally. What we reveal about each individual person is how they deal with the pressure--maybe somebody's smoking, somebody's crying, somebody's very reflective. Again it's the same kind of thing: We're shooting this over nine minutes. I'm writing the soundtrack for it. To me, that's my album. I don't make albums anymore. Albums are just a waste of time. People are into trailers and singles."

Filed Under: cult
Categories: Interviews
Comments
Leave A Comment
Back To Top