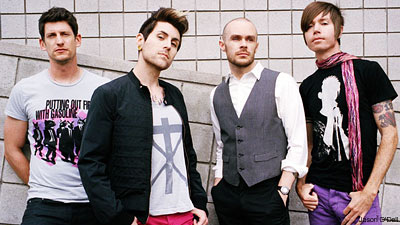 AFI have always embraced change. They might have started out as a revved-up punk band in the vein of fellow West Coast acts like Bad Religion and Agent Orange but they've evolved their music into something with a much wider scope throughout the years. AFI have incorporated everything from the dramatic goth-rock of Fields of the Nephilim and early the Cult, to the kinds of electronic soundscapes usually found on Depeche Mode albums.

'Crash Love,' AFI's latest album, finds the Ukiah, Calif. quartet stripping things down a bit. Compared to the electro leanings of their more recent work, the collection is comprised of material that wouldn't sound out of place on their beloved 'Sing the Sorrow' album. On a break from AFI, vocalist Davey Havok and guitarist Jade Puget formed a synth-pop project called Blakq Audio. The duo's 2007 debut album, 'CexCells,' was a love letter to modern dance acts such as Apoptygma Berzerk and Seabound.

Noisecreep talked to Havok about the new AFI material and if Blakq Audio informed any of it.

It wasn't a conscious thing, but when you listen to it, it's obviously been affected by Blaqk Audio. It was a result of it, but it definitely happened more organically. When we started writing the songs on 'Crash Love,' we didn't have a clear direction. But once we started playing together again, it just came out like the older stuff a bit.

With something as synthesizer-driven as Blaqk Audio, it's easy to control the sonic side of the songwriting and production. When you're playing the kind of stuff AFI does, you have to relinquish some of that control. Was that tough coming back to?

The control aspect was definitely appealing when we did that stuff, yes. But Jade enjoys that a bit more than I do (laughter). For Blaqk Audio, he handled all of the music, and I did the lyrics and melodies. Everything you hear in the music was done by Jade. Every single blip and bleep was him and I know he liked that a lot. So getting back in a room with the other guys for this AFI stuff was fun because it's a completely different way of working.