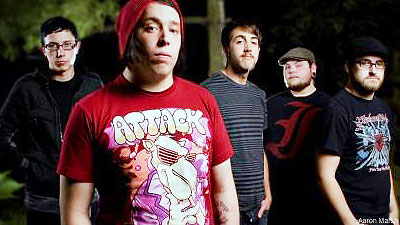 "It actually has a really important meaning to us," I Am Abomination vocalist Phil Druyor weighed in to Noisecreep on 'Rock 'n' No Soul.' "The song is about the fact that image is being used so strongly to market music. We don't want the clothes we wear or the type of haircut we have to sell our music for us. We just want the album to speak for itself."

And 'Rock 'n' No Soul' does speak for itself, as the band has grown from their EP where they merely dabbled and experimented with twisting notes. The Michiganders have embraced prog, and in terms of the fashion condemned in the song, it would be hard to predict such a sound on mere picture of the quintet. This is a Great Lakes honoring of Rush.

"I feel like its the middle ground for what we want our music to be," Druyor said. "It has a taste of all of our efforts in other songs but still retains is sense of originality." The song also grabs onto heaviness as the rhythm takes to a pound and crunch when We Came as Romans vocalist Dave Stephens soars in as a guest.

'To Our Forefathers,' which comes out May 11, is the band's full-length debut and is available for pre-order from Good Fight Music. Behind the button and knob helm for the outing was Joey Sturgis (the Devil Wears Prada, Of Mice & Men). "Attention to detail!" Druyor enthused while recollecting what it was like to work with Sturgis. "That man has the most insane knack for perfection. If something isn't spot on, it doesn't stay."

Download I Am Abomination Songs
Filed Under: I Am Abomination, IAmAbomination, of mice and men, OfMiceAndMen, Rush, The Devil Wears Prada, TheDevilWearsPrada, we came as romans, WeCameAsRomans
Categories: Exclusive, Interviews
Comments
Leave A Comment
Back To Top