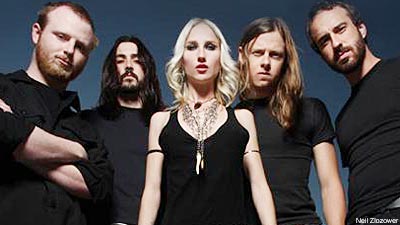 One of the hardest working women in the hard rock and metal community is Tuesdae. The vocalist, DJ and promoter is a fixture on the Los Angeles music scene. She fronts Noisecreep favorites Chelsea Girls, playing hits from bands like Ratt and Judas Priest, plays in Under the Covers with Dave Navarro, and is the director of promotions for a party called Rock Mondays at a club called Les Deux, in Hollywood, Calif. If that weren't already enough, Tuesdae has just started a new metal band called Huntress.

In this Noisecreep exclusive, we spoke with Tuesdae about the new band, her life in music, and we also find out why she's got a thing for unicorns.

Between fronting the Chelsea Girls, DJing and the Under the Covers project with David Navarro, your schedule must be packed. What inspired you to start Huntress?

When it comes down to it, I'm a champ at time management. I won't allow myself get overwhelmed. All of my projects are music-related and I really love my work. DJing is the best job ever. Chelsea Girls and Under the Covers with Dave Navarro are cover bands. I dig singing the epic, challenging rock and metal anthems that I didn't write. However, I created Huntress to write and perform original music. That and helping destroy mediocrity has always been my mission.

Who else is in the band?

I scored a talented pack of shredders! Four months ago, I met the boys in a Los Angeles based metal band called Professor. I booked them to play my weekly party, Rock Mondays at Les Deux in Hollywood, and they blew my mind. When they heard the Huntress demos, they offered to join forces with me. The band is Sean Ford on drums, Blake Meahl and Ian Alden on guitars, and Greg Imhoff on bass.

How would you describe Huntress to someone who hasn't heard you guys yet?

It's heavier than you'd imagine. But there is a pop sensibility to it. Girls will dig it, nerds will worship it. Listen to Professor on their MySpace page, and imagine a banshee screaming over those riffs. That's Huntress! The material is timeless and cinematic, frightening yet romantic.

You have a really powerful voice with a wide range. We read that you've been trained in opera, but as a kid, was metal and hard rock your first love?

Thank you. I began singing opera at 10 years old, and developed a four-octave range by 14, so most of my life has been devoted to performance and training in the arts. I've always been a firecracker, and even though I adored opera, I needed more darkness. So I started a Misfits tribute band at 15 with my best friend Ben Joplin in Oneonta, New York. High school sucked, I was poor and angry. Suicidal Tendencies, Slayer, Metallica, Iron Maiden and especially Danzig, helped me escape tough times.

Who were your heroes growing up?

I'm not kidding here, but unicorns. I'm still obsessed. My collection of unicorn memorabilia is intense. But growing up on a farm with six siblings and eccentric, divorced parents really shaped my life. My father, mother and step-mother, were my heroes. They said "If you can dream it, you can be it." I rarely see my family or speak with them, but they'll always be significant to me.

In some of the photos that Neil Zlozower shot of Huntress, you show off a lot of flesh. Do you find that your strong sense of sexuality intimidates some people?

I know for a fact my sexuality intimidates some people. I also know it could sell records. I'm not making music to get noticed, fame is not the goal. But I desire a particular lifestyle and know how to play the game. Shooting with Neil Zlozower is effortless. He's a genius with light and a dear friend. I have no shame when we work together.

Huntress plays its debut show at Les Deux in Hollywood on April 5. What can people expect from the song set and live show? Do you approach your personal performance the same way you do your other projects?

The biggest factor in my performance (and in my life) is integrity. It's special to be part of three musical projects that are all unique, but the approach remains the same. And that is musicianship. It's at the core of Chelsea Girls, Under the Covers and Huntress. At the Huntress debut on April 5, people can expect some theater, blood, and taxidermy. It gets heavy. For years I sang in the smoke-filled cabarets of New York City. I admire Alice Cooper and aspire to his level of showmanship. Theater is part of my persona. Showbiz!

What are five heavy metal records you can't live without?

Iron Maiden – 'Number of the Beast'