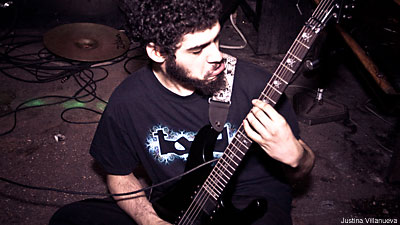 "That was disgusting with a side of nasty," Humanity Falls guitarist Ammo Diaz said at the end of Disgruntled's set. Disgruntled -- a brutal grindcore duo with a monstrous grunting drummer -- played right before Humanity Falls and right after Grindbastard on Feb. 15 at New York's Lit Lounge.

A Humanity Falls show is dangerous one. Especially if you are a member of the band, as I witnessed when frontman Eston Browne threw guitarist Diaz to the floor. Even with the two of them tangled in cords on the floor, Diaz still played his riffs with fervor. I was standing right in front of them and I still have no idea it happened.

These brutal death metal lovers are bringing a little bit of madness back to local shows. When the band opened for Ancient Wound and Crucifist at the Knitting Factory a month ago, the dudes handed me a demo with handwritten text on the CD. As it turns out, they recorded, mixed and burned 500 of those. And now they're working on a full-length. It's appropriately titled 'Ordaining the Apocalypse.'

"This ones about ... f--- that, it doesn't matter what this one is about," Browne said. There is a lot of emotion boiled up in these maniacs. Monday night was the second time I saw them play at Lit Lounge. I'm sure it won't be the last, because Browne has been guest curating and DJing at the Precious Metal Showcases.

If you like the New York brand of brutal death metal (a la Immolation and Malignancy) be sure to check out Humanity Falls. On March 20, they will open for Misery Index and Gigan at the Championship Bar in Trenton, N.J.