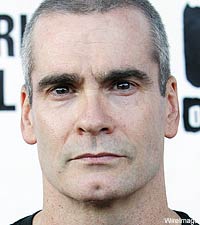 Henry Rollins adores acting, but don't call the musician and spoken word artist an 'actor.' "For me, the acting is what I do when I'm not on tour," Rollins told Noisecreep. "It basically keeps me employed. I take the work serious but not myself. I'm not ever going to call myself an 'actor.' But I'm a guy who gets an acting job now and then, and I give it all I've got."

And he isn't one to say no. Take 1998's holiday tale 'Jack Frost,' for example. In it, he plays hockey coach Sid Gronic, who channels Rollins' aggressive nature. "When the director called and said, 'Do you want to do this?' I said, 'Yes. What is it?' It was a good summer of work. The director, Troy -- Troy Miller -- he had that show ,'Mr. Show.' Amazing show. Hilarious. Troy is amazing. I like him. He gave me a job. There's nothing I don't like about him."

Rollins, who is forgoing acting this year to tour the world on a spoken-word jaunt, recently wrapped up a stint starring in multiple episodes of the second season of FX's 'Sons of Anarchy' that premiered fall 2009. In it, Rollins played A.J. Weston, a white-supremacist gang leader and new antagonist in the show's town of Charming, Calif. His character was killed off at the end of the season.

"Loved it. Loved it," Rollins said, heavily stressing the second phrase. "There wasn't a bum in the bunch. They're such a great group of people. So talented. Cast and crew. No rock stars. No one had an attitude. No one was too cool for school. Everyone was so friendly. Everyone was so nice to me. Like everyone in the cast came up to me and said, 'So glad you're here, man.' We acted hard. A lot of fight scenes. A lot of stuff blowing up.

"Episodic TV is interesting. It just becomes your life. You are in this drama week after week after month -- April, May, June, July, September. The same people. You come to the set. You're a part of the story that's evolving. You don't know what's happening to your character until you get the script. 'Oh no!' It was fantastic. It was one of the better summers of my life."