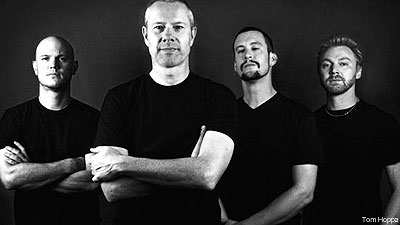 Right now -- yes right now -- via Helmet's official website, frontman/guitarist Page Hamilton has taken it upon himself to digitally re-release the classic album 'Betty,' which many consider to be the pinnacle of Helmet and the cornerstone of their undeniable influence.

Originally released in 1994, 'Betty' was the follow-up to 'Meantime.' But with changes in the second guitar position (Rob Echeverria filling the open slot), the band took on a sound that still kept the furiously riff-fed noise and added more melodies and infectious harmonies.

"The whole thing threw me for a bit of a loop; my life was in total upheaval after a split with my then-fiancée, now ex-wife," Hamilton says of the album. "It was a f-- you to the music biz/mainstream that had discovered our indie world of Amphetamine Reptile, Sub Pop, Touch and Go, Discord, SST, etc. ... I never considered myself indier than thou, but I never embraced the crap that grew out of Helmet or Nirvana or Fugazi or the Jesus Lizard or Melvins."

The digitally-updated version contains five bonus tracks: three originally released on the LP version and two from the 12-inch single for 'Biscuits for Smut.'