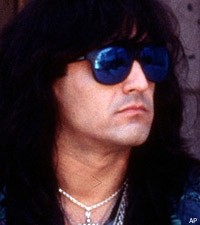 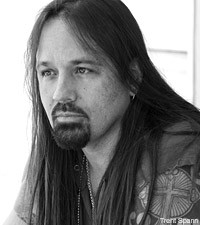 The late Sen. Edward Kennedy called health care reform "the cause of his lifetime." The Democrat's recent death has reignited the already heated health care debate in America. While a few of us are making our voices heard at boisterous town hall meetings, some musicians are also adding their opinions to the conversation.

"I think all of the right wing people that are being influenced by Glenn Beck and Rush Limbaugh should just relax and look at countries like England and Canada, where it works, and realize we deserve to have that as well," says Great White guitarist Michael Lardie of universal health care. "If they want to go to a socialist country, go to where my ancestors are from: Go to Russia if you really want to see what that is like! Read your history, figure out what you're talking about." Lardie describes himself as being a "Democrat since a little kid."

Lillian Axe guitarist Steve Blaze, however, is proudly on the other side of the political aisle. "If you look at other countries ... look at dental care in the U.K. It's not that good," argues Blaze. "I think [lawmakers] go from one extreme to the other. It's too expensive right now, but now we're going to go to where people don't have to pay anything. When it breaks down -- taxpayers will pay for it. People that work, we're paying for it. What [lawmakers] need to do is get the jobs and promote and stimulate the economy of our country, and have some pride in our country and our belief system that we were founded on. That's what needs to be worked on."

Blaze also argues that universal health care will be nearly impossible to regulate, and as a result, the quality of care will likely decline. "I pay out a lot of money each month for myself and my family to have health insurance, and a lot of people that should don't. A lot of people that have the money don't. When you're at the doctor's office and your health is in his hands, that's when I feel like, you know, I don't have any problem with doctors being millionaires. Because we rely on them so much."