When Great White released Elation earlier this year, the band wasn't just celebrating a new release, it was also celebrating officially welcoming a new singer to the fold. The group formally selected Terry Ilous (also of XYZ) as its new frontman, replacing Jack Russell due to what the band calls "addiction issues." For guitarist Mark Kendall, there was no one else to fill Jack's shoes but Terry.

"You know when Jack couldn't come back (from being on sabbatical due to illness); Terry had already been in the band like for a year and a half. He had done over 80 shows (with Great White), and we were in love with the guy. So it was never even talked about auditioning. Terry was always our choice. He fit with our music so well, and he is such a joy to be around. I cannot believe this guy, he is really a good person. You know he's a humanitarian too.

"He's the type of guy that wants to save the whales and stuff. So he's really, really a super person, and where I'm at in my life... he's the perfect guy for me to be around. He's so gifted, he's so talented. This guy sings live every night and you never hear a bad note. I mean, he literally has all this range, and he just performs like it's the last performance of his life or something," explains Kendall.

Jack Russell also has a version of Great White, currently booking as Jack Russell's Great White. Lawsuits are pending on the use of the name.

Great White is often lumped into the hair metal genre, but fans know the band is more blues-based and sort of the anti-thesis of glam. Ilous still sings lead for hair metal band XYZ, jumping in and out of metal genres with ease.

"Terry is an amazing blues singer," admits Kendall. "He loves blues. He does a lot of musical projects and he sings straight ahead blues. You know, you can even hear more of the blues because I'm a very blues based guitar player. All the guitar players that I grew up listening to are what you would call 'field' players. I love Billy Gibbons, Johnny Winter, Stevie Ray Vaughn: guys that play out the pores of their skin. So with the way Terry sings, it just melts into my guitar. It's incredible. But he's very gifted. He grew up playing palomino guitar. He's I guess French and Spanish, and he grew up in Europe. And he listens to a lot of music. So he's really well rounded. He's a pretty amazing person."

With all the admiration for the band's new lead singer, the choice of the word "elation" as the band's album title makes sense. Kendall even refers to Ilous as a sort of Zen master, lifting the spirit of band members. This enlightened spirit flowed into the band's creative process, making writing and recording feel almost seamless.

Watch Great White Perform 'Rock Me' at the M3 Festival, 2012

"In the studio we just kind of let ourselves be free, and it was just the environment. There was just something in the air," says Kendall, trying to explain the band's collective emotions. "Everything was so positive feeling that when we started thinking of titles for the album, words were popping out like "elation." We ended up going with that. It was the way everybody was feeling. Just elated. And so we decided it fit and it fit the music on the album, and so we went with it."

In addition to writing and guitar credits on Elation, Kendall also helped produce the album. This is something Kendall has been doing for years, as far back as the band's 1987 breakthrough album, Once Bitten. He also produces for other artists, explaining that he has a sort of "gift" for fixing other people's errors.

"I guess when you're not inside your own painting, it's easy to stand back when it's someone else's music and just go, 'Well if you did this, this, and this, I think it would be awesome.'"

Kendall doesn't limit his producing to just rock bands. He's also done work with hip hop groups. For Kendall, the style of music doesn't much matter. He just enjoys being a part of the creative process.

Great White has several tour dates booked through the end of the year, both in the U.S. and abroad. The band will also perform on the Monsters of Rock Cruise set for March of 2013. 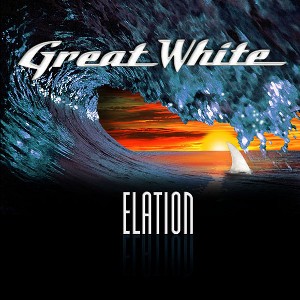 Great White's Elation is available now on iTunes and Amazon.