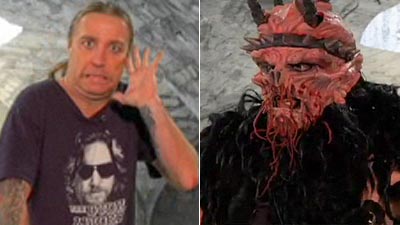 Everything about Gwar front-thing Oderus Urungus is larger than life but nothing tops his mouth. Also known by their fans as the 'Scumdogs of the Universe,' Gwar were banished from space and sent to Earth over 25 years ago and have been wreaking heavy metal havoc ever since. Their live show is a spectacle of blood, guts and other bodily fluids while their discography has made them one of the most consistenly thrilling acts out there. In this Noisecreep video exclusive, Dave Brockie interviews Oderus Urungus about the band's new album, 'Lust In Space,' and their 25 year anniversary in the music business.

Anyone familiar with Gwar already knows that Urungus is quite the outspoken alien. In the video interview below, victims of his verbal wrath include Angelina Jolie, Lindsay Lohan, Bono and even Slayer's Kerry King. That's just the tip of the iceberg folks!