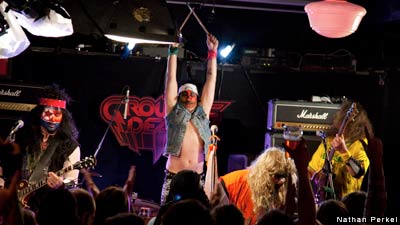 It's the mother of all soccer/metal publicity stunts, like Spinal Tap with a soccer backstory! Global advertising agency W+K created the first and only soccer-inspired metal band, Group of Death. The name is a reference to the toughest, opening-round group chosen during the World Cup draw and Group of Death were conceived in order to help promote the fevered moment of the sport's highly competitive draw.

W+K generated buzz the way most publicists would with a real metal band! They sent press kits to soccer bloggers and tastemakers at World Cup Insider, EPL Talk and This Is American Soccer and offered up interviews with the Group to create a profile. Even ESPN promoted the concert during their coverage of the draw. 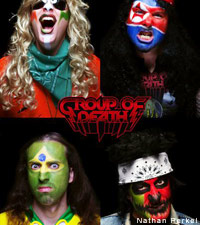 Lead singer and songwriter Baron von Steve described the Group's songs in a statement, saying, "'Welcome to the Group of Death' made everyone pay attention to us as a band and take our love of football and metal seriously. It's your introduction to the band and everything we stand for."

The song 'We All Call It Awesome' was scribed after an incident in an Irish pub with some college kids over the term 'soccer' vs. 'football' in 1998. "There needs to be a song that unites 'football' and 'soccer' fans everywhere," the singer said.

The tune 'Soccer City' is a tribute to the 2010 World Cup, which is pretty much why Group of Death exists! Baron von Steve also said, "We're so psyched for the country of South Africa, because they love football over there and they love to bang their heads. We have had thousands of fans request that we play over there, but we haven't been able to go because [our other lead guitarist] The Ant has a fear of elephants. We keep telling him that we won't go on a safari or anything but he doesn't want to take the chance."

As the 2010 World Cup draws nearer -- it's in June, if you're not a soccer freak -- expect to hear more from Group of Death.

Filed Under: Elvis Presley, ElvisPresley, Group of Death, GroupOfDeath, Ricky Martin, RickyMartin, spinal tap, SpinalTap
Categories: Interviews
Comments
Leave A Comment
Study Shows Which Rock + Metal Songs’ Lyrics Are Most Often Misheard
13 Rock + Metal Bands With Their Own Official Board Games
‘This Is Spinal Tap’ Movie Sequel Expected to Arrive in 2024
Ric Parnell, Drummer Who Played Mick Shrimpton in ‘This Is Spinal Tap,’ Has Died at 70
Musicians That Believe Aliens Exist
Opinion: We Can’t Afford to Separate the Art From the Artist
10 Unbelievable Supergroups That Actually Almost Happened
10 Rock + Metal Covers More Famous Than the Originals
10 Most Iconic Hairstyles in Rock + Metal, Chosen by AJ Diaferio of We’re Wolves