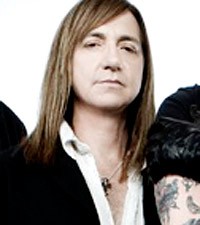 "Scott is one of those guys who is completely California, and I think he gets the whole zen of what Great White is," says Great White guitarist Michael Lardie of new bassist Scott Snyder. Snyder joined the band a couple years ago after Sean McNabb left to focus on his acting career.

But what about bonding with a new band member when bus tours are a thing of the past, and all the other guys have been together at least two decades? For Lardie, it is not a problem.

"There's a lot of bonding in a short period of time. Scott lives very close to everyone and we rehearse all the time. Scott and [drummer Audie Desbrow] do projects on Audie's house. Scott's a real tinkerer -- he's done tattoos on three of us already. He's a great tattoo artist. I spend a lot of time in Scott's house when I go to L.A. There's a symbiosis between he and I and it's working out great."

Of course, this is rock 'n' roll, so it's not all hugs and kisses. There are pranks, too. "I do my best every night to say something on stage right to make [Scott] laugh so hard that he might drop a note," admits Lardie. "It's this thing I go after every night: 'What can I say to make him laugh tonight?' When you connect with someone on that level, you feel like you've known them much longer than a couple of years."