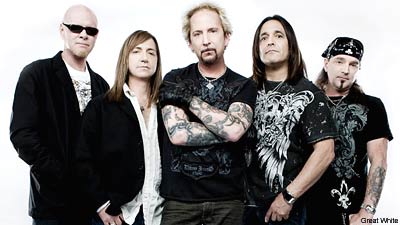 "I think we've always approached it as every new record, we try to do a couple of songs and not seven or eight songs," says Great White guitarist Michael Lardie of the band's decision to mix up the set.

During 2008, Great White invited bassist Scott Snyder to join the band after Sean McNabb's departure. The band then worked together to create 'Rising,' produced and engineered by Lardie. 'Rising' is Great White's 11th studio effort.

To say Great White faced difficulties would be an understatement. There's the typical stuff like battles with addiction and lineup changes. Then there's the extreme: The Station Nightclub fire on February 20, 2003, that left 100 dead, including a member of the band. Still, the band has bounced back by playing countless shows, continuing to record and celebrating three decades of rock.

"We are definitely plugged into realizing that our fans have allowed us to have a career this long and our fans want to hear our stuff that has been part of their mindscape and landscape for a number of years," continues Lardie. "It takes them back to a place where it's a great memory for them and if they hear it 20 years later ... it's a brand new memory ..."

'Rising' is available now via Frontiers.