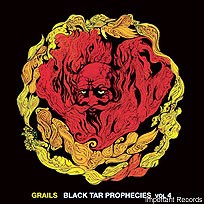 For the pysch-heavy Grails, the 'Black Tar Prophecies' have acted as a method for the instrumental band to travel more darkening paths as well as separate themselves from all the hefty post-genre tags they've been attached to over the years.

According to Important Records, who handles the sonic exploration releases of the Oregon band, volume four combines "back masked Satanic tape collage with old 'Emmanuelle' soundtracks." These releases have always fared more as a soundtrack to some kind of lost Italian horror movie than a delightful record designed to entertain. With Om silent drummer and multi-instrumentalist Emil Amos focusing his prowess in Grails, they already have a another 'Black Tar' volume in the works and a proper full-length being finished up for release later this year on Temporary Residence.

Currently, volume four is only available on vinyl, but a CD release is planned to be combined with the forthcoming installment.