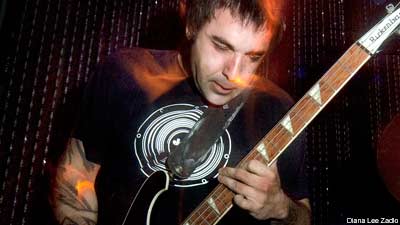 "Damn it, we missed Lichens," this writer grumbled to her companions as we finally got to Johnny Brenda's, one of Fishtown's nicer venues and home to more hipsters than you can shake an ironically-angled stick at. The bar downstairs hummed contentedly as the regulars settled in to while their nights away over warm PBR and overpriced 'local drafts,' but this cozy scene held nothing for us, nor for the determined amp worshipers that lazily finished their smokes and wended their way up the rickety staircase to Johnny Brenda's live room. Who needs beer when there are sweet, sweet riffs to drink in? That's right, Om was on the way.

The man behind Californian 'new folk' outfit Six Organs of Admittance took the stage to the sounds of whispers and hushed instrumental murmurings. The crowd hung back for a moment, but as soon as Ben Chasny's fingers met strings and his first shimmering, apocalyptic folk tune drifted out of the amps that rested around him in a semi-circle, like children at storytime, their attention was riveted. His voice was pure, ethereal and just a little vulnerable; achingly human and spun in threads of darkness.

Comparatively speaking, the weatherbeaten solo work of Neurosis' Steve von Till came to mind, paired off with the starry-eyed Midwestern skyrides of Earth's recent output, all chiming chords and post-everything malaise. Chasny took time out to gently encourage the audience to stop by the merch table and check out his brother's new book, to which Six Organs of Admittance is, apparently, a soundtrack. His set was met with reverent silence that quickly thundered into rapturous applause; clearly, forty minutes was not enough. Six Organs of Admittance are something very, very special indeed -- do yourself a favor and check out the new record, the ever-so-aptly titled 'Luminous Night,' out from Drag City. 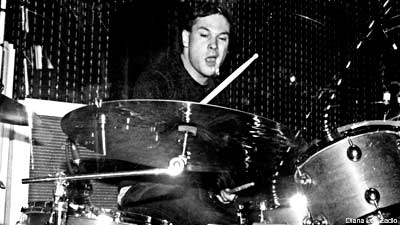 A bitter cold wind kept between-set smoke breaks short and ensured that both the floor and balcony areas were absolutely rammed by the time Om strolled onstage. The meditative dronelords are made up of the indomitable Al Cisernos (who has been abusing the low end for decades as a member of Asbestosdeath, Sleep and now Long Beach doom all stars Shrinebuilder) and new drummer Emil Amos (Grails, Holy Sons).

Om rolled right into a blissful set as the duo were joined on stage by Lichens' Robert Lowe on tambourine and droned their way through just shy of 90 minutes' worth of space jams, heavy on material from new joint 'God Is Good' (Drag City) and livened up by Amos' joyfully physical drumming. After the 60-minute mark, though, the warmth of Cicernos' bass started lulling me to sleep and the sporadic neo-tribal interludes began to wear a bit thin. Half the crowd seemed to share this sentiment, while the other half was still glassy-eyed and utterly entranced, prompting this writer to surmise that Om sober doesn't make quite as much sense as Om in an altered state of mind.

Ether way, they're more than worth catching live -- even if you have to leave before the encore and throw on a little Coroner in the car to get your now-sluggish blood moving once again.