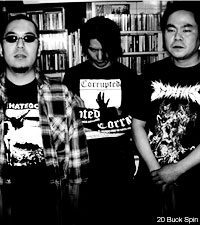 PUTTING THE WEST COAST UNDER THE STENCH: Japanese death-doom-sludge trio Coffins (at left) have announced a west coast tour to precede their appearance at the 2009 LA Murderfest on May 9. The tour hits markets in Washington, Oregon, and California. The band is keeping quite busy in the release department -- they recently dropped a new seven-inch called 'Warhead,' featuring a studio and a live version of their cover of the Venom song of the same name. Order that from the band directly. Additionally, be on the lookout for a split 12" with Philly goregrind sensationalists XXX Maniak entitled 'The Cracks of Doom.' Maniak's side of this split features a grand total of 20 tracks to Coffins' mere two, due to the former's tendency to write songs that often fail to crack the minute mark. On top of all that, Coffins also have a three-way split seven-inch on deck with Grudge (the Japanese, not Finnish, one) and Tokyo's Anatomia as well as splits with Lobotomized, Spun In Darkness, and Pig Destroyer. Coffins released 'Buried Death,' their latest full-length effort, in June of 2008.

A NEW DIRECTION: Drone duo Om are currently in Electrical Audio Studios in Chicago with producer/engineer Steve Albini working on their fourth album and first for new label Drag City. The record, still untitled, will also be the first full-length effort to feature new drummer Emil Amos (Grails), who joined bassist Al Cisneros (ex-Sleep) after the departure of original Sleep/Om drummer Chris Hakius. Look for that September 8th, but in the meantime you can get a taste of the band's new Amos-influenced direction by downloading a pair of new(ish) tracks at Brooklyn Vegan. Both songs come off Om's 'Gebel Barkal' seven-inch, which was originally available only through Sub Pop Records' 2008 Singles Club.

A TRIBUTE TO ROKY: Chicago's Minsk, featuring producer/engineer extraordinaire Sanford Parker on bass (Rwake, Nachtmystium, Pelican, Samothrace), and New York's Unearthly Trance are teaming up for a split seven-inch of Roky Erickson covers. The split is out via Parasitic Records as opposed to the bands' home label, Relapse. Minsk will be releasing a new LP on May 26th, entitled 'With Echoes in the Movement of Stone,' and Unearthly Trance dropped their latest LP, 'Electrocution,' early last year.