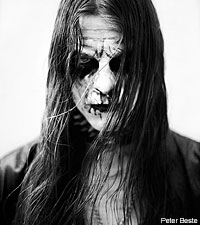 Gorgoroth frontman Roger Tiegs (a.k.a. Infernus) has been immersed in Norwegian black metal blasphemy since 1992, and played a major role in staging the band's controversial 2004 show in Krakow, Poland.

During that concert, Gorgoroth performed on a stage adorned with nude male and female models nailed to crosses and real sheep's heads affixed on stakes. Afterwards, the Polish government investigated them for "offending religious feelings" and violating animal rights laws. They were later cleared on both charges.

Given the extremity of Infernus' artistic vision, it's a bit surprising to find that when he's at home, he's usually by himself reading, practicing or writing music. Sometimes he hangs out with friends, but rarely does he socialize with members of the black metal community.

"I think there is a lot of hype from some people who define black metal in a different way than I do," Infernus tells Noisecreep. "I don't really identify myself with most of those people. I prefer my own company, and most of my own contacts are people not involved in the metal scene."

Moreover, Infernus is disdainful of black metal musicians who embrace Aleister Crowley's 'Do what thou wilt' edict as an excuse to be irresponsible and inebriated.

"There is a certain understanding of the decadent rock culture that indecent behavior should be something acceptable within the circles of being defined as black metal," says Infernus. "I think that's completely wrong. Black metal's not supposed to be like that. Many people in the scene, to me, represent a drive towards partying, drinking, being morons, living the rock myths. And that's just not good enough."

Not only is it "just not good enough," to Infernus -- it defies the very deity they claim to praise. "It's unSatanical by definition," he argues. "It's something I regard as destroying oneself, and it's inappropriate. Black metal should be built on a Satanic foundation, and this kind of behavior is uncomprehendable to me."

Filed Under: gorgoroth
Categories: News
Comments
Leave A Comment
Back To Top