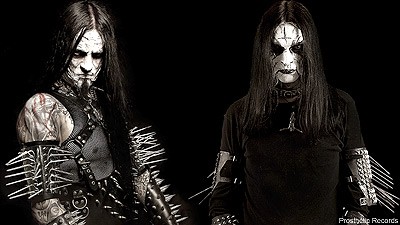 With a new album, 'Underworld Regime,' out via Prosthetic Records on April 13, Ov Hell, the black metal pairing of Gorgoroth's King ov Hell and Dimmu Borgir's Shagrath, aren't committing to touring ... just yet. "We are looking into the possibility of playing a few select shows with Ov Hell," King told Noisecreep. "We have the organization, and we have also gotten good offers to play live. So far it has been impossible to confirm any dates. We will however play live with Ov Hell, but for now it is hard to tell when this is going to happen."

So hold your breath, because it appears you'll be able to exhale and see an Ov Hell show. As black metal continues to step into the light, which many of its hard-line fans detest, King is happy to steer clear of aligning himself with any scenic specifications. "I don't regard myself as a part of any scene," he said matter of factly. "I have a small group of musicians I work with, and in that respect, it's essential to what I am delivering. I have always been against any sort of brotherhood in metal. I leave that to Manowar. What other bands do or not do is none of my interest."

While Shagrath has written most of the lyrics on 'Underworld Regime,' King isn't interested in deciphering the meaning, as that's Shag's job. He said, "I do, however, see the message of Ov Hell in a bigger picture. It takes part of what I have presented in bands such as Gorgoroth and Jotunspor. I do not change my views on religion, morals and world order, even though I present my art under different band names. It all takes part of the satanic agenda I have always presented." Hail Satan, after all!