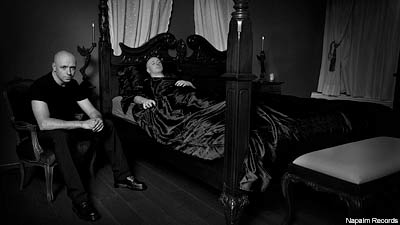 Gorefest and Hail of Bullets drummer Ed Warby has traded death for doom in the 11th Hour. The slower tempo and change in musical direction heard on the band's debut disc 'Burden Of Grief' can be attributed to "Playing guitar basically," Warby tells Noisecreep. "I've liked doom metal since the early '80s. A friend of mine was into tape trading and he introduced me to Trouble, Nemesis and Candlemass; I was totally into it. But playing drums in a doom metal band never seemed that interesting 'cause it's so slow. I like being flashy and doing crazy fills. So I never really considered playing doom metal as a drummer myself.

"But then a couple years ago, my sister bought me a Squier Strat Guitar starter kit with a little amplifier. She sensed that I wanted to venture out as a musician. I just started riffing and wrote a couple tunes for La Muerte, the Gorefest album. For ['Rise to Ruin'], I wrote quite a lot of tunes. In the meantime I'd met [vocalist] Rogga [Johansson of Edge of Sanity, Paganizer] on the internet. He's a computer buddy; I've never met him [in person]. We get along real well in cyberspace. He asked if I wanted to do some doom in the vain of Winter; really ugly, slow, grey doom metal."

Warby obviously likes to keep things loose and varied. "With Hail of Bullets I try to get some doom in there sometimes, but that's a very different kind of doom. It's never really pretty. With this I wanted to be majestic and epic with piano parts and strings, go all out on the arrangements. As a final step of insanity, even sing the whole thing."

When deciding upon a name for his new project, Warby admits, "I wanted something dealing with death. To me, the 11th Hour really captures the last hour of life. I wasn't aware that there's a pretty strong biblical connotation. There's a television show in Holland called the 11th Hour, and it's very religious. I didn't even think about that. For me it's the final hour of life and your last chance to set things right. The next album will be heavily about death again."

Despite the fact that 'Burden of Grief' was just released at the beginning of November, Warby is ready with a follow up. "I've been living with these songs for a year and a half. I was looking at my Pro Tools files and the first one is dated May 2008. I took a couple months to write them but once they were done, I didn't change much about them; just re-recorded them using better instruments.

"In between I kept writing. So I already have five or six songs for the next album; four are complete and the other two are ideas. So if Napalm said they wanted another album, I could get to work right away, which I'm not going to because we're doing the Hail of Bullets album first. So the next 11th Hour album will have to wait until next year."